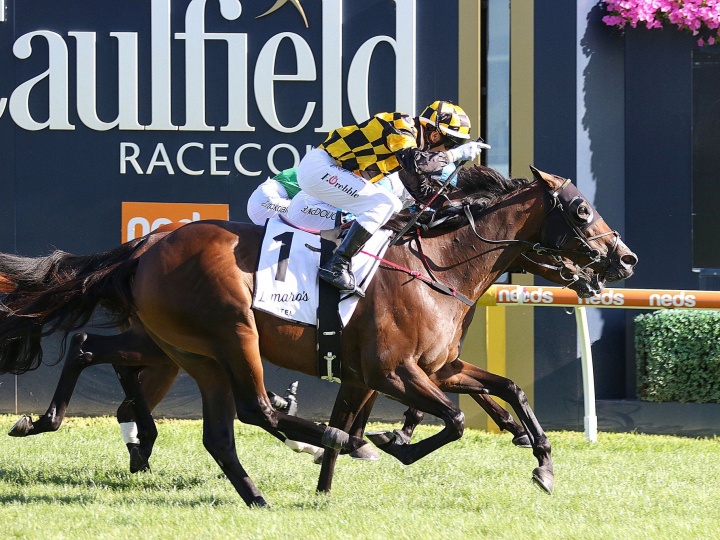 Glamour farm graduate Probabeel showed her class on Saturday afternoon with a triumphant return to competition at Caulfield where she successfully defended her G3 Geoffrey Bellmaine S. title.

In her first appearance since a meritorious fifth in the G1 Cox Plate in the spring, the Waikato Stud-bred daughter of Savabeel was caught a little flat-footed at the top of the straight before powering over the top of her rivals in the concluding 100 metres.

Probabeel will have her next start in the G1 Futurity Stakes, another race she won last season, before a second crack at the All Star Mile after she was tripped up by a wet track in the 2021 edition.

“We stuck to the tried-and-true method through the Geoffrey Bellmaine and then into the Futurity. She’d had a nice trial here at Matamata and a jump-out so she is in really good shape,” trainer Jamie Richards said.

Probabeel settled fourth on the outer and hit top gear in the closing stages for rider Brett Prebble to open her campaign on a winning note.

“She hit a flat patch and was spinning her wheels a bit. They made it a sprint home and her class kicked in late,” Prebble said.

“She had a big weight (60kg) and she’s just a pleasure to ride and I’m grateful for the opportunity.”

Probabeel was bought out of Waikato Stud’s draft at New Zealand Bloodstock’s National Yearling Sale for $380,000 by Te Akau chief David Ellis and is raced by Cambridge Stud.

She is the only live foal produced by the Pins mare Far Fetched, who won three races and was third in the G3 Lowland S.

She is out of a half-sister to the Group-winning sisters Legless Veuve and Tootsie, dam of the multiple Group 2 winner Ocean Emperor. It’s also the family of the dual Group 1 winner Savvy Coup and Tivaci’s G1 Flight S-winning daughter Never Been Kissed.