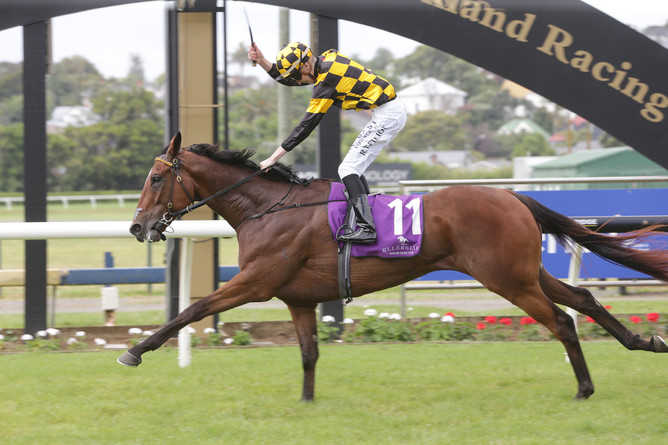 Apprentice Ryan Elliot celebrated his recent red-hot run of form when he guided outsider Prince Jabeel to an upset victory in the Gr.3 Pencarrow Stud City of Auckland Cup (2400m) at Ellerslie.

Carrying the colours of breeder and part-owners Brendan and Jo Lindsay, the under-rated five-year-old hadn’t figured in any pre-race discussions but proved he deserved his place in the staying feature as he fought off all challenges after taking the lead approaching the home bend.

The Savabeel gelding had the audacity to pull clear in the final few strides as Elliot’s whip flourish sparked connections into some wild celebrations in the Ellerslie grandstand.

“We thought he had a chance, but gosh, he’s just won easy, I can’t believe it.

“We sent him over to Moira Murdoch’s at the beach last week and it obviously works. I think I’d better go there for a week myself.

“That’s the third stakes winner for the mare which is so exciting.”

Prince Jabeel is from Danehill mare J’Adane, who was placed on seven occasions at stakes level including a runner-up finish in the 2007 Gr.1 Kelt Capital Stakes (2040m) behind Princess Coup. She is also the dam of Group winners Von Tunzelman and Sherrif.

Trainer Lance Noble was thrilled with the result as he looks ahead to a two-mile challenge for his charge.

“It’s amazing to be able to do that for Brendan and Jo and the whole team,” he said.

“It’s a big team effort so to get a win on a day like today is fantastic.

“If he’d run a nice placing, I was going to be happy, but Ryan rode him really well as the light weight was a big help.”