Exciting times ahead for promising mare 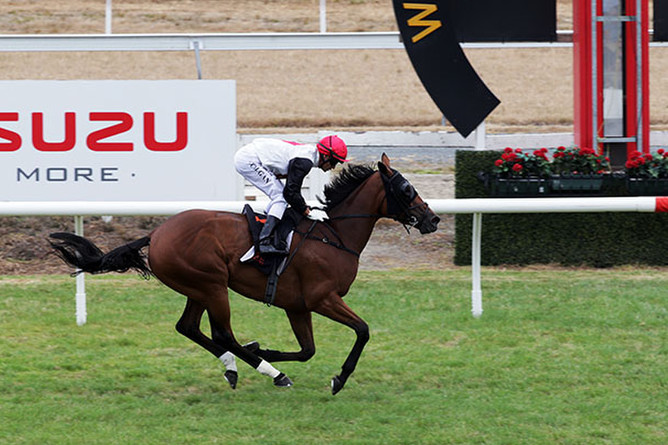 Exciting staying prospect Rondinella gave racing fans at Te Rapa on Saturday another glimpse of her undoubted talent when she treated her rating 82 rivals with disdain when scoring handsomely over 2100m.

The Ocean Park four-year-old mare was all class as she looped the field for rider Vinnie Colgan with 600m to run, before cruising clear in the home straight to win untouched by six lengths.

Touted by co-trainer Roger James as a potential top-liner early in her three-year-old season, Rondinella had that campaign cruelly ended when suffering a hoof injury soon after finishing fourth in the Gr.2 Sir Tristram Fillies Classic (2000m) a year ago.

Patiently handled, the daughter of Group One performer Valpolicella signaled her return to the track with a fresh-up win over 1400m last November. Four starts since then have yielded two further victories as James and co-trainer Robert Wellwood continue to get her career back on track.

“I expected her to be very hard to beat,” James said.

“I’ve said from day one that she was very high-class and while we’ve had a hiccup or two, we are going to keep reaping the benefits as she is a very good mare.”

James was at his cryptic best when signalling the way forward for his charge.

“When you’re coming through the grades, it’s a little bit one race at a time,” he said.

“Don’t be surprised if I do something a little bit out of left-field with her in the autumn as we have to take advantage of that abundance of ability that she has.”

James isn’t dwelling on what could have been but for the injury the mare suffered, although he did admit it was a dreadful feeling when he discovered the situation.

“I’m one to look forward not back but I was nearly in tears when I discovered her injury in the autumn,” he said.

“You get over these things and it has been handled well by everybody and she is problem free now.

“It may have been a blessing in disguise as she is more mature now.”

Rider Vinnie Colgan, who was substituting for the ill Michael Coleman, was quick to reiterate the comments made by James about the mare’s ability.

“The race went to plan as I got off (the rail) as soon as I could and the rest of the race just went perfect,” he said.

“She’s very talented and Roger has always had a big opinion of her.

The win was part of a special treble on the day for Haunui Farm who also saw horses that had been sold by them at the National Yearling Sales in the past three years pick-up victories in the Gr.2 Cambridge Stud Sir Tristram Fillies Classic (2000m) with Imelda Mary and the Gr.1 BCD Group Sprint (1200m) with Melody Belle. – NZ Racing Desk