A Trip Down Memory Lane – Glamour Puss and Swick 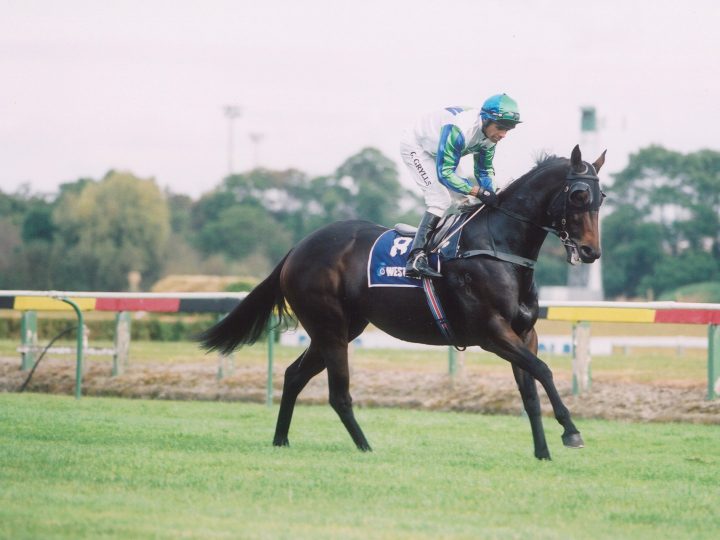 As the famous Flemington Carnival comes to a close, it features the main sprint race for the week – the $1 million VRC Sprint Classic.

Over the years, the 1200m showpiece has had a number of different names including the Salinger Stakes, Emirates Classic, The Age Classic, Patinack Classic and Darley Classic just to name a few.

In 1999 Waikato Stud sent a number of mares to Storm Cat’s Group 1 winning son Tale Of The Cat. Among those mares were Last Lady, a sister to Kinjite who produced the Group 2 winner Scaredee Cat and the Group 2 placed Centaine mare Escada (Centenaire in Australia) whose filly raced as Glamour Puss.

She was always a lovely filly and was destined to race in the Waikato Stud colours. After her initial education at Courtza Park, she was sent to the stables of Paul O’Sullivan. Given plenty of time, she was wasn’t seen at the races until the Spring of her three-year-old career. Starting in a 1200m Maiden at Matamata in October, she showed she had plenty of ability with a strong debut performance, charging home to claim victory close to the line.

After one more start, she was given a spell and resumed with an impressive win at Te Rapa in February. Although she placed in two of her next four starts, Garry and Mark (Chittick) made the decision to send her over to Australia and she was placed in the care of good friend Danny O’Brien.

During the Spring of 2004, she was allowed to work her way through the grades winning two (and being placed twice) of her five starts. At this stage, a plan was hatched to tackle the two Group 1 races in Adelaide.

Stepping up to Stakes level in February, she won the Listed Moduline H.R.C Stakes at Caulfield before heading to the $300,000 Group 1 Robert Sangster Stakes at Morphettville. She ran a very creditable second to the great mare Alinghi. Given a month between runs, she showed her class with an impressive victory on a very heavy track in the $250,000 Group 3 Sapphire Stakes at Randwick.

Returning to Morphettville, she proved far too good for her opposition, claiming her first Group 1 with a victory in Adelaide’s premier spring race – the $300,000 Goodwood Handicap. Obviously being a Group 1 winner, whatever she did from now on was a bonus.

Given a spell, she was set for Spring. After an unplaced run in the Manikato Stakes, she ran second in the Group 2 Gilgai Stakes. Having had two runs back from a spell and dropping five kilograms, she claimed her second Group 1 when winning the Salinger Stakes.

Doing so well during the week, Danny O’Brien had very little hesitation backing her up in the Group 2 The Age Classic seven days later. Again, she left the likes of Stratum, Cape Of Good Hope, Dance Hero and Takeover Target in her wake, completing the ‘Sprint double’.

Following a second in the Group 1 TJ Smith Stakes at Randwick in April, the decision was to made to send her to Royal Ascot in England. As she had gone so well when backing up at Flemington, she was set for the Group 2 King Stand over 1000m on the Tuesday before competing in the Group 1 Golden Jubilee Stakes four days later. She ran very well on the first day finishing 1.4 lengths behind Takeover Target but wasn’t as her best in the Golden Jubilee, finishing 10th.

This was to be her last race and she was retired to stud. She did a great job at stud and all eight of her foals have won a race and two have been Stakes performers. Glamour Puss passed away in 2016 but her legacy lives on at Waikato through a number of her daughters which have been retained.

Some would regard O’Reilly gelding Swick as enigmatic but he was probably more a victim of his racing pattern – he settled well back in his races before charging late.

Born in the Spring of 2001, he was a very attractive looking colt and was always the favourite of then Yearling Manager Yvonne Shanks. Going to the 2003 Yearling Sales, he was purchased by Champion Australian trainer Bart Cummings for $100,000.

Given the one ‘educational’ run as a two-year-old when finishing third at Rosehill in May, he returned in the Spring with an impressive win at Kembla Grange. Stepping straight up to Group 2 level, he was placed in the Stan Fox Stakes. On the back of this performance, Bart ran him in the Caulfield Guineas but he ran below par behind Pins colt Econsul and following another poor performance at 1600m, he was turned out for a spell.

He only had a very light three start preparation during the Autumn. Returning in February he won again fresh up at Rosehill before coming from last to finish third in the Listed Darby Munro Stakes and second in the $250,000 Group 2 South Pacific Stakes. Given another three-race preparation in the Spring, he returned in April 2006 with victory at Rosehill.

Again turned out after a disappointing run in the Doncaster Handicap, he resumed with a fourth placing in the Group 1 Salinger Stakes at Flemington before winning the Group 3 Sandown Stakes. He was then spelled and ran first up in the Newmarket Handicap, ran that year at Caulfield. He finished 1.4 lengths behind the likes of Miss Andretti and Gold Edition.

In the Spring, the highlight of his four-start preparation was winning the Group 2 Salinger Stakes at Flemington on Derby Day before returning in the Autumn with a narrow second to the mighty Apache Cat in the Group 1 Lightning Stakes. He followed up with fourth placings in both the Group 1 Newmarket and Group 1 BTC Cup at Doomben.

As a seven-year-old, he returned in the Spring of 2008 and put in a couple of ordinary performances before coming from near last to run second in the Group 2 Gilgai Stakes, again down the straight at Flemington. Set again for the Melbourne Cup Carnival, he was only fair in the Group 2 Salinger Stakes on Derby Day before Bart Cummings decided to back him up in the Group 1 Patinack Classic.

As per his normal racing pattern, he settled last for rider Michael Rodd before tracking into the race strongly coming onto the course proper. He quickly reeled in Turffontein before going on for an impressive victory.

This was a massive day for Waikato Stud as their filly Daffodil had earlier in the day won the Group 1 1000 Guineas at Riccarton and Pins mare Tootsie won a Listed race at Te Rapa.

This was to be Swick’s last win and he ended his career with six wins and just under $1.1 million in prize money.