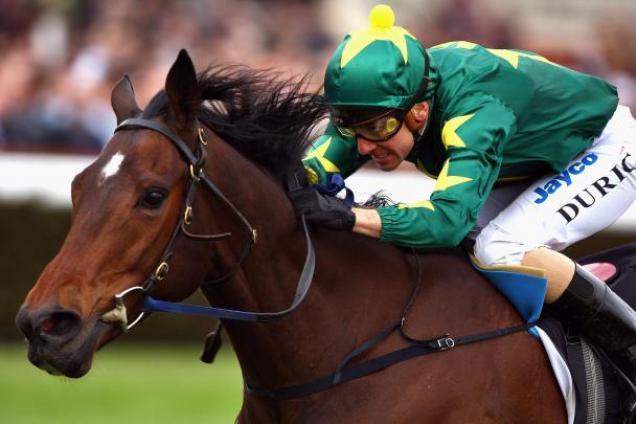 The 2007 Caulfield Cup will be forever etched in our memories with short-priced favourite Maldivian being led back to the mounting yard by the Clerk of the Course with blood streaming from his neck after rearing in the barriers. This vision overshadows the performance of Master O’Reilly who displayed his great staying ability, going on to beat his stablemate Douro Valley by 2 ¼ lengths.

The Master O’Reilly story begins back in 2001 when David Jones (not the Department Store – will come to that later) sent his Bakharoff mare north to the promising young stallion O’Reilly. O’Reilly’s first crop had just turned three and included the dual Group 1 winner Final Destination.

A reasonably late foal, Master O’Reilly was born on the 2nd of December in 2002 and spent his early days growing up on Paritai Stud at Rakaia, about half an hour south of Christchurch. Entered for the NZB South Island Sale, he was catalogued as Lot 54 and sold to the bid of Victorian trainer Brian Johnson who was acting on behalf of Liam Sutcliffe Holdings for the equal top price of $75,000.

Brought to Australia, Bill Sutcliffe of Liam Sutcliffe Holdings gave the two-year-old colt to little-known trainer Judy Mawer at Cranbourne. After a couple of trials as an early three-year-old, he wasn’t seen at the races until June when finishing 3rd over 1200m on a very heavy track at Moe and it took him until his sixth start before he broke his Maiden – coincidentally in a Class 1 race over 1700m at Sale.

Showing his staying potential, he won his next start over 2000m by six lengths before making it three wins in a row when winning over the 2400m at Mornington, two days before Delta Blues’ won the 2006 Melbourne Cup.

By this time, he was well and truly on the radar of Flemington trainer Danny O’Brien who was keen to purchase the rising five-year-old for stable clients. Bill Sutcliffe wasn’t keen to sell him but thought if Danny had such an opinion of the horse, he would give him to Danny to train. To compensate Judy Mawer who had done a fantastic job with him, Bill gifted her a 10% share.

Having his first start for his new trainer, he was very competitive when resuming over 1400m in February, finishing 3rd at Sale before a 4th placing at Sandown. After a couple more placed runs over 2100m and 2400m at Sandown, he was taken north for a Class 6 over 2600m on Easter Monday at Randwick. Ridden by Damien Oliver, it was a dominant staying performance going on to win by a length. Returning to Melbourne with regular rider Vlad Duric back in the saddle, he easily accounted for his opposition over 2500m at Moonee Valley.

Turned out for a spell, his Spring campaign was centred around the Caulfield Cup. He resumed over 1600m at Caulfield in August and came from near last to be narrowly beaten by Group 1 winner Rubiscent before winning with ease over 2000m at Flemington. Stepping up to Stakes level for the first time, he ran a creditable 3rd in the Listed JRA Cup at Moonee Valley. At this stage, he needed to win the Group 2 Winning Edge Presentations Stakes (Herbert Power Stakes) to avoid the ballot for the Caulfield Cup a week later.

Starting an ‘odds on’ favourite, he was given a lovely ride by Vlad Duric and went on to win by 1 ¼ lengths from Zavite – he had won his way into the Caulfield Cup! Everything went to plan during the week and fared very well at the barrier draw when coming up with barrier 5 with the favourite Maldivian drawn just inside him.

Master O’Reilly headed into the barriers without any hassles but once he was in,  the chaos started – Eskimo Queen went off in the stall next to him, thrashing around and eventually ‘sitting down’ in the barriers. During the commotion (where Master O’Reilly was kicked a number of times), Maldivian became unsettled, reared up and somehow gashed his neck. All three horses were taken out the barriers and had to undergo a veterinary inspection – luckily Master O’Reilly was passed fit to run while the other two were late scratchings.

Again given a top ride by Vlad Duric (who had to get down to 50.5kg), he travelled strongly throughout the race. As they came into the straight, stablemate Duoro Valley made a dash for home but Master O’Reilly’s superior staying ability came into play, going on for an impressive 2 ¼ length victory – top class New Zealand mare Princess Coup was a further 1 ¼ lengths back in third. Unfortunately he probably never got the recognition he deserved as many felt that Maldivian would have won if he didn’t hurt himself before the start.

I still remember there was a great photo of his crossing the line with a David Jones (the Department Store) sign on the Stewards Tower and I always thought this was quite appropriate with his breeder having the same name!

This was to be his last victory. Pressing on to the Melbourne Cup, he wasn’t seen at his best, finishing 8th, and was over eight lengths from the winner Efficient. Although he never won again, he was still a great horse for his connections. He finished 2nd in the Group 1 Turnbull Stakes at Flemington, 3rd in the Group 2 Sandown Classic and 4th in two Melbourne Cups (all up he contested the great race four times).

When retiring from the track, he had won eight races and was $15,000 short of $3 million in earnings. He lived out his days peacefully at Pearcedale (near Cranbourne in Victoria) before passing away a couple of years ago.