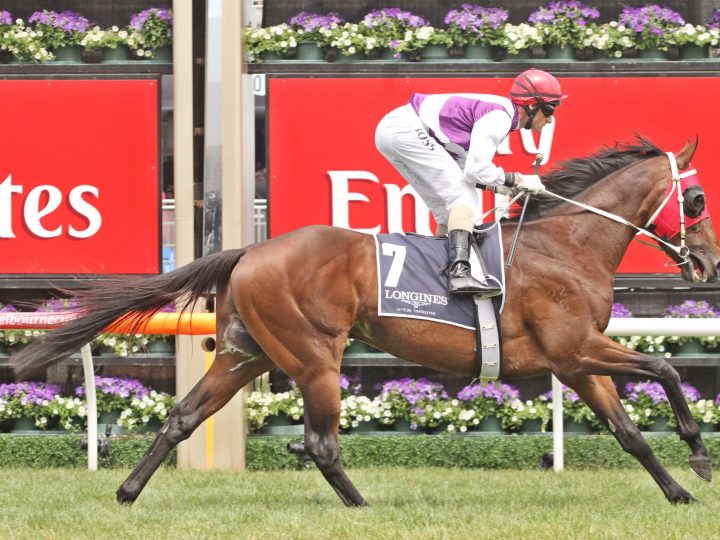 Saturday sees the ‘greatest two minutes in sport’ – the 98th edition of Group 1 WS Cox Plate, which will be run for the first time with a purse of $5 million. To the racing purist, it is the race they want to win and is where the best horses from around Australasia and now, the world battle it out over 2040m at the unique Moonee Valley track.

New Zealand has a rich history through the deeds of the immortal Phar Lap who was able to win twice in 1930, 1931 through to Surround, still the only three-year-old filly to win Australia’s Weight For Age Championship. Who could forget the mighty Dulcify’s seven-length demolition in 1979 or Bonecrusher racing into ‘equine immortality’ in 1986 when defeating Our Waverley Star in the Race of the Century. New Zealand dominated the race through the early nineties – Surfer’s Paradise, Super Impose, The Phantom Chance, Solvit and Octagonal. In 1997 the earth rumbled with Might And Power before the great mare Sunline won in 1999 and 2000. Pins gelding El Segundo was far superior in 2007 while Maldivian was victorious the following year.

The last New Zealand bred winner was in 2012 when four-year-old entire Ocean Park defeated Australian ‘pin-up’ boys All Too Hard and Pierro. The Ocean Park story starts back in 2007 when Brent and Cherry Taylor sent their Zabeel mare Sayyida to Thorn Park. Trained by Roger James, he had a very good opinion of Sayyida and thought she was better than her two wins from five starts would suggest.

Born at Trelawney Stud in October 2008, Ocean Park went to the NZ Bloodstock Select Sale at Karaka in 2010. Hong Kong owner Andrew Wong and Matamata trainer Gary Hennessy had decided to buy a yearling in partnership and with the possibility that he might end up in Hong Kong, Hennessy was after a colt that looked like a 2000m horse that could run in the Hong Kong Derby. In his opinion the Thorn Park x Sayyida colt fitted the bill – there was a lot of Zabeel about him so he was purchased for $150,000.

Given time to mature, he was unraced as a two-year-old, just having the three trials in the Autumn before being turned out for the Spring. He won his trial at Cambridge in late October before making his debut at Gisborne over 1200m. Not wanted in the betting, he started at over 15/1 and after being hampered in the early stages, he charged home to be in a dead heat with Jakob Gambino.

Just over three weeks later, Gary Hennessy took him to Ellerslie for a strong 3YO race over 1550m. Again not wanted in the betting, he settled back in the field of nine before producing a big finish, going on to win by a length. He then stepped up again to Group 2 level for his next start in the Great Northern Guineas on Boxing Day. To be fair, he was a good thing beat. After being slow to begin, Chad Ormsby had trouble getting him into the clear but once he did, he ‘flew’ home to be beaten narrowly.

By now Hennessy knew he had one of the best three-year-olds in the country. He took him to Trentham for the Group 3 Wellington Stakes where he raced away from multiple Group 1 winner Nashville, winning by 4 ½ lengths. Heading to the Group 2 Waikato Guineas over 2000m, he was narrowly beaten by top-class O’Reilly filly Silent Achiever.

In preparation for the New Zealand Derby, he was taken to Ellerslie and on the Tuesday morning was given a gallop on what was a very wet track. Not handling the conditions and with a ‘weather bomb’ forecast for later in the week, Hennessy made the decision to scratch to save his Hong Kong owners making the trip. He was then prepared for a Sydney campaign where he had two starts including a ½ neck defeat over 2000m in the Group 1 Rosehill Guineas.

Given a spell, he came back in the Spring as arguably the best horse in Australasia. Resuming in the Group 1 Makfi Challenge Stakes over 1400m, he settled back in the field before charging home to win impressively. Electing to bypass the final two legs of the Hawkes Bay Triple Crown, which he looked to have a mortgage on, Hennessy decided to take him to Melbourne for two Group 1 races heading into the Cox Plate.

With flamboyant Australian jockey Glen Boss booked to ride, he contested the Underwood Stakes over 1800m at Caulfield and proved too strong for his opposition, going on to win by a ½ length. Three weeks later he returned to Caulfield in the Caulfield Stakes over 2000m – the main lead up to the Cox Plate. Again he proved superior and he looked on target for the Moonee Valley feature.

He had the measure of the older horses but the two ‘gun’ three-year-olds All Too Hard and Pierro, who had quinellaed the Caulfield Guineas added a different dimension to the race – and under the Weight For Age scale, he had to give them 8kgs. Drawing barrier nine, Boss allowed him to find his feet in the early stages settling back in the field. Starting to improve his position coming to the turn, he charged down the middle of the track to claim All Too Hard over the concluding stages.

After a third placing in the Group 1 MacKinnon Stakes a week later at Flemington, he returned to New Zealand and the decision was made to get him ready for a trip to Dubai for the $3.5 million Dubai Duty-Free at Meydan (Dubai). First up over 1600m he finished fourth in a field of five in the Group 1 at Otaki before getting back into the Winners Circle with a comprehensive 3 ½ length victory in the Group 1 New Zealand Stakes at Ellerslie.

Taken over to Dubai, he wasn’t seen at his best and the decision was made to retire him to stud and was purchased by Waikato Stud. With his oldest only four-year-olds, he has made a great start to his stud career and his stats compare favourably against fellow Cox Plate winner and Champion Sire Savabeel. With an inch of luck, he could already have a New Zealand Derby winner (Mongolianconqueror) and Queensland Oaks winner (Another Dollar) – both were beaten in photo finishes. With horses in all the major stable throughout Australasia, his future looks very promising!