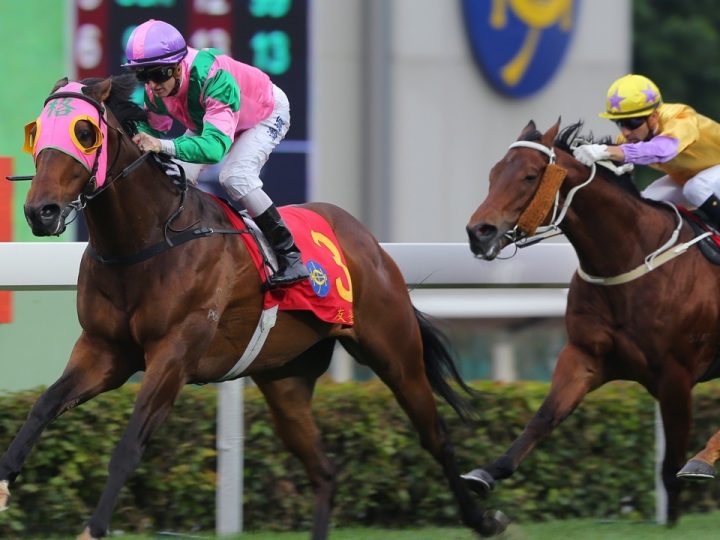 Relief was an over-riding emotion for expatriate New Zealand trainer Paul O’Sullivan following the successful comeback of his outstanding Kiwi-bred sprinter Aerovelocity (Pins).
He was on edge before Sunday night’s Gr.1 Centenary Cup Sprint at Sha Tin, but the seven-year-old son of Pins retuned in a blaze of glory for his fourth win at the highest level.
“It’s a nervous time bringing a horse back,” O’Sullivan said “I was especially nervous between the 500 metres and the 400 metres. When they’ve had that sort of problem that’s when they blow up, and then it’s goodnight, but when he cantered up I thought ‘yes, it’s your day.’
“He’s trialled better, he’s holding his weight like he did last season and we certainly were far happier going into this, but of course when a horse has had a heart irregularity you’re always a bit apprehensive.”
Aerovelocity had missed the opportunity to defend his Gr.1 Longines Hong Kong Sprint crown in December due to an earlier incident of a heart irregularity and cost him a shot at the US$1 million Global Sprint Challenge Bonus.
He had earlier claimed both the Gr.1 Takamatsunomiya Kinen in Japan and the Gr.1 KrisFlyer International Sprint in Singapore.
“It must have been a very difficult decision for the owner, Daniel (Yeung Ngai), to pass up the Hong Kong Sprint and the chance of a million dollar bonus, but they were brave enough to do it,” O’Sullivan said.
He has a loose future plan for Aerovelocity, but he has yet to lock in the path toward another feature short course target.
“I know what the options are and we’ll probably prioritise the race back here in May (the Gr.1 Chairman’s Sprint Prize), but I haven’t even sat down and worked out the dates,” O’Sullivan said.
Aerovelocity was ridden by his regular partner Zac Purton and they had to survive a protest from the connections of the third-placed Peniaphobia before they were safe.
“He gave me a difficult ride, but I did the best I could and he won pretty comfortably in the end,” Purton said. – NZ Racing Desk.
Back to all news
SHARE
Recent News