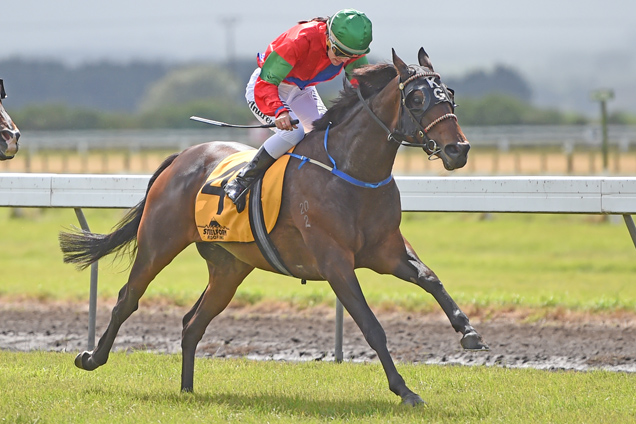 All In Vogue (NZ) (Pins) raced to an 18-to-one upset win in Saturday’s $50,000 New Zealand Bloodstock Warstep Stakes (2000m) at Riccarton, ending the NZB Southern Filly of the Year Series with a four-way tie.
Trained in Palmerston North by Kevin Gray, All In Vogue was stakes-placed in February in the Listed Bob Sharrock Memorial Oaks Prelude in New Plymouth. But a run of disappointing form since then meant she was largely overlooked in the lead-up to Saturday’s race. She ran 12th in the NZB Insurance Stakes the previous week.
But on Saturday she turned her form around in emphatic style, strongly running out the 2000-metre distance and overpowering her rivals through the final stages of the race. Her time of 2:02.03 was the second-fastest in the history of the race.
Maiden galloper Little Haast (NZ) (Faltaat) tried h
ard down the straight but had to settle for second, beaten by three-quarters of a length while Princess Davone (NZ) (Iffraaj) fought on solidly and finished four lengths away in third.
A daughter of the Group One winner Tall Poppy (NZ) (Kaapstad), All In Vogue is raced by Peter and Min McDonald of Stratford.
The McDonald Investment Trust purchased All In Vogue for $50,000 at the 2014 Premier Sale, where she was offered by her co-breeders Fairdale Stud. She has now recorded two wins and two placings from 12 starts and has earned $42,125.
All In Vogue picked up 7 Southern Filly of the Year Series points for Saturday’s victory, putting her in equal first place alongside Canterbury Belle Stakes winner Windborne (NZ) (Darci Brahma), NZB Airfreight Stakes winner Honor That (NZ) (Darci Brahma) and NZB Insurance Stakes winner No Pushover (NZ) (Pins).
-NZB
Back to all news
SHARE
Recent News