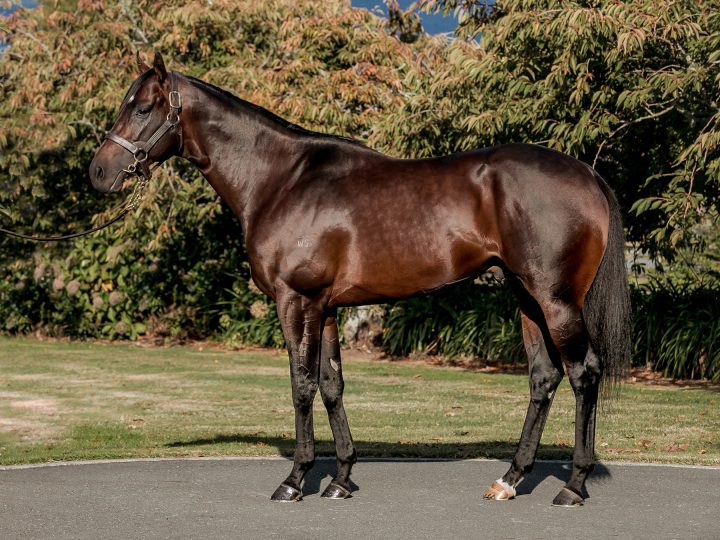 Lightly-tried stakes winning sprinter Ardrossan will offer New Zealand breeders a unique opportunity to tap into a high-class source of speed and class when he begins the second phase of his career later this year at Waikato Stud where he will stand at $8000 + GST.

The precocious son of champion stallion and sire of sires Redoute’s Choice has been retired following a career-ending injury in Sydney where he had finished third in the Gr.3 Star Kingdom Stakes on an unsuitably heavy track.

His effort behind the multiple Group winner Siren’s Fury and the Group One winner Manuel, beating home the Gr.1 Golden Slipper Stakes winner Estijaab in the process, was full of merit as he had only ever won or placed on good to dead ground.

“We never got to see the best of him and he reminds me in some ways of O’Reilly at the start of his stud career,” Waikato Stud principal Mark Chittick said.

“He had a very limited racing career, but we also got to see his brilliance before he was retired.”

Ardrossan began his career with Stephen Marsh at Cambridge and made an immediate impact with an unbeaten two-year-old campaign. He was an easy debut winner followed by a runaway victory in the Listed Waikato Equine Veterinary Centre Stakes.

He subsequently joined Mick Price’s stable in Melbourne where he was below par in three outings after he acquired an issue which caused a strain on his heart.

Ardrossan returned home for a good break and was back to winning ways first-up from a spell for Marsh before racing away with the Gr.3 Concorde Handicap, accounting for a strong field of stakes winners and Group One performers.

He then finished a gallant third in the Gr.1 BCD Group Sprint behind the multiple Group 1 winner Melody Belle and the Australian Group Three winner Bostonian.

That performance earned Ardrossan a trip to Sydney where his career sadly ended after his Star Kingdom placing.

“He is a beautiful horse. His racing career was certainly interrupted by a couple of setbacks, but he showed his speed and what an unbelievable turn of foot he had when he was as close to 100 per cent as we could get him,” Chittick said.

“That was certainly as a two-year-old and for a Redoute’s Choice colt to win so impressively first-up over 800 metres is the exception rather than the rule.

“When we got the opportunity to see that speed he had a beautiful, flowing action and it was pretty to watch.”

Ardrossan retires as the winner of four of his nine starts and showed blistering pace to triumph from 800 to 1200 metres.

“He was picked by a top judge as a yearling and now three years later he’s come to stand at the farm,” Chittick said.

He was secured as a potential stallion by respected Masterton bloodstock agent Bruce Perry for $150,000 at the Inglis Melbourne Premier Sale in 2016. He was purchased on behalf of Waikato Stud, JML Bloodstock, Jamieson Park, Jomara Bloodstock, Dame Lowell Goddard, Brown Thoroughbreds and David and Nicki Wilson.

“They have all stayed in and there will also be a limited number of shares made available,” Perry said.

“He will get really good support at stud and with this ownership group we will be making sure in the future that a fair few of his progeny end up in Australia.

“It’s a shame his career ended early and we didn’t see the best of him. It would have been nice to see him in Brisbane and I’ve got no doubt he would have measured up in the big races.”

Ardrossan’s late sire Redoute’s Choice has been a major influence on Australian racing and is recognised as an outstanding sires of sires, his Group One-producing sons Snitzel, Not A Single Doubt and Stratum attest to that.

Ardrossan is a half-brother to the stakes winners Cheyenne Warrior and Bergerac, and three other multiple winners, with their dam Miss Argyle. The daughter of Iglesia was also a speedy juvenile and finished runner-up in the Listed Gimcrack Stakes.

She is a sister to Diamondsondinside, who won 15 races including two at Listed level and was a Group Three placegetter.

It is also the family of the Gr.1 Queensland Oaks winner Mother Of Pearl and the Gr.2 Queensland Guineas winner Express Air.

“We’ve got a fantastic group of owners and there was never any pressure, it was all about doing the right thing by the horse,” Chittick said. “They are all avid breeders and he’ll get great support. He certainly suits a lot of mares in our broodmare band as well.”