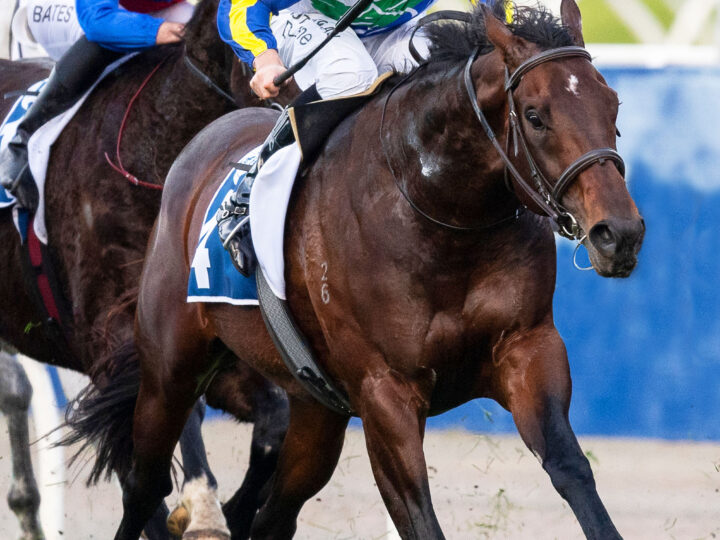 Waikato Stud is excited to be offering the first son of Champion sire Written Tycoon to stand at stud in New Zealand, with Banquo joining the 2021 stallion lineup.

An impressive type, Banquo earned his place on the roster after several quality wins over sprint distances. He broke his maiden in his fourth start before backing up 12 days later to win the 2019 Listed Springtime Stakes at Flemington over 1400m on the final day of the Melbourne Cup Carnival.

Banquo was beaten by only .2 of a length in the superb sprint, the G2 Autumn Stakes, a race won by Group 1 winner Microphone, and previously by speed sires Centaine, Canny Lad and Dash for Cash. He then proved he could foot it with the fastest, beating home elite sprinters Exceedance, Tofane and Libertini when finishing close up in an illustrious running of the G1 Newmarket H., where the field had collectively won 11 Group 1 races.

“Banquo is an incredibly good-looking horse and he was very talented,” said trainer Danny O’Brien.

“He won a stakes race at his third run as a 3-year-old and raced very well for us the following spring, just beaten in a Group 2 race at Flemington as a 4-year-old. He’s a genuine group-class sprinter that unfortunately we didn’t get to see at his best.”

A $600,000 yearling purchase by top judge Bruce Perry, Banquo is by Written Tycoon, Australia’s current Champion sire and brilliant sire of juveniles. Written Tycoon is developing a strong reputation as an emerging sire of sires, with his Golden Slipper-winning son Capitalist now arguably the most exciting young stallion in the Hunter Valley.

Banquo is a brother to G1 Oakleigh Plate winner Booker. Dam Noondie was a winner over 1200m and is by Flying Spur, successful broodmare sire of Champion stallion Sebring and young Group 1 winning stallions Pierata and Preferment.

“Banquo made a statement as soon as he walked out as a yearling. He had presence and quality,” recalled Bruce Perry. “He was a very athletic and good moving yearling.”

One of only five new stallions to stand in New Zealand this season, Banquo is the only colonial-bred option. With Written Tycoon, I Am Invincible, Not A Single Doubt and Snitzel rounding out the top four sires in Australia in 2021, and Savabeel and Fastnet Rock securing the quinella in New Zealand, Australasian-bred sires are continually proving to be most reliable source of quality. In fact, a foreign-bred stallion has not won the major premiership in New Zealand since 2010 or in Australia since 2015.

“Waikato Stud has an incredible history of success and for Mark to take him on shows the belief he has in Banquo,” said Perry.

“It’s pretty special for Banquo and his owners, as we know he will get every opportunity. Waikato Stud don’t get it wrong very often with their stallion selections.”

Banquo will stand for $4000 + GST for his first season; the same fee Centaine was launched.