Bold performance for son of Savabeel 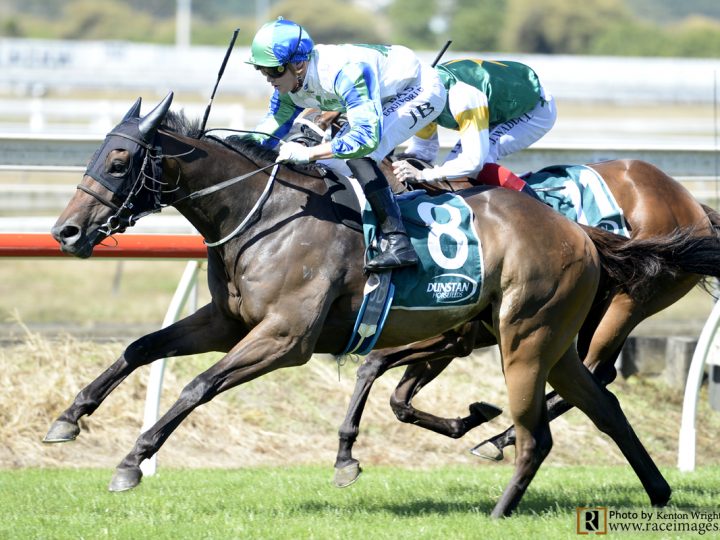 In the colours of Waikato Stud, Anything But (3 g Savabeel – But Beautiful, by Pivotal) confirmed his promise by winning the $10,000 Chooky’s Auto Maiden 1400 metres on 28 February at Pukekohe.

“He found the line very well last time for fourth over 1200 metres and stepping to 1400 metres looked ideal,” she said.

“We’ve been happy with his condition and his behaviour is continuing to improve with experience. Jake (Bayliss) does a lot of work with him at home, has ridden him at the trials and race day, and it’s good to get the win for Waikato Stud.

“I was a little bit worried when he was well back on the corner, but a strong tempo helped and the further he goes the better he will be.”

A better draw (7) ensured a more economical trip for Anything But and he was able to position sixth on the inner behind a tearaway pacemaker. Still with plenty to do approaching the 300m, he quickened appreciably when sighting daylight and flattened out nicely to the line.

“He’s still a bit hot but that was well behaved for him,” Bayliss said. “He trotted around nicely and was good at the gates. He was happy to tuck behind them and his raw ability came out in the end and he proved too good.

“He’s a good work in progress and could be some sort of horse if he can get his head space right. It will come. He relaxes nicely and I can see him getting out to a mile.”

Anything But was bred by Celia Crawshaw, nee Chittick, and owned by Waikato Stud and Ballymore New Zealand.

A winner of three races to a mile in the U.K., dam But Beautiful is a daughter of high-class sprinter and excellent sire Pivotal (Cozzene). Anything But is a son four-time Champion Waikato Stud stallion Savabeel (Zabeel). A Cox Plate (Gr. 1, 2040m) winning three-year-old, Savabeel (Zabeel) instils incredible quality into his stock, proved himself to be one of the most versatile stallions in Australasia, and his record speaks for itself.

Anything But was strapped by Sophie Beadle.