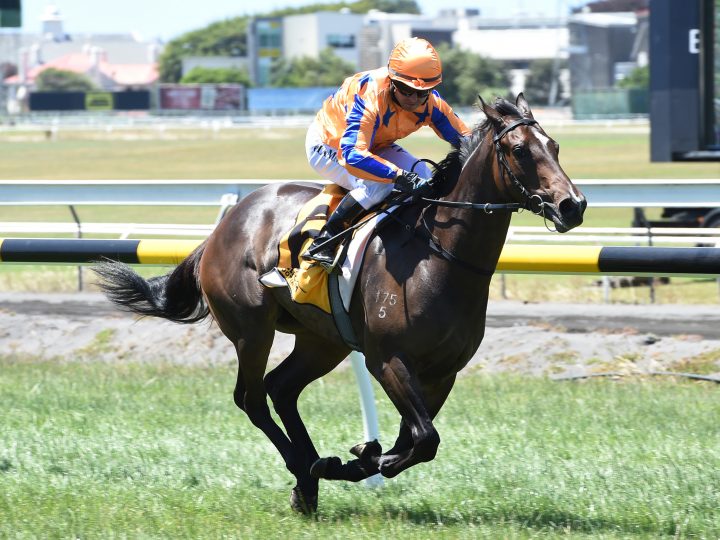 A positive report from Opie Bosson paved the way for The Real Beel’s winning debut at New Plymouth. “She looks a pretty classy filly and a little injury held her up before Opie jumped her out last week and he gave the green light to come here,” said Jamie Richards, who prepares the youngster with Stephen Autridge.
With stable jockey Bosson committed to engagements at Rotorua, Cameron Lammas was aboard The Real Beel this afternoon and he enjoyed an easy time aboard the daughter of Savabeel. They crossed the field from the outside gate to lead and coasted clear in the straight. “We really like her and everything went the right way,” Richards said. “Wayne and Joanne Phillips bought her at Karaka so well done to them, their first winner from their first runner.”
The Real Beel was a $110,000 purchase on the Phillips’ behalf by Te Akau principal David Ellis from WS’s 2017 draft. She is out of the O’Reilly mare Ahna and claims the legendary Eight Carat as her fourth dam. The stable will now look for a suitable opportunity to give the juvenile a chance to nail down a berth in the country’s richest two-year-old event at Ellerslie on January 27. “We’re racing against the clock for the Karaka Million, but we’ve got to have a throw at the stumps,” Richards said.
WS also enjoyed success at the Rotorua meeting where Ladynadel broke her maiden at her third start from the stable of Murray Baker and Andrew Forsman. The former purchased the Savabeel filly for $20,000 at Karaka in 2016 and the Matamata farm will offer a half-sister (Lot 426) during the Book 1 Sale at Karaka next month. They are out of the Pins mare Nadel Dame, a half-sister to the former Singapore Horse of the Year Currency.