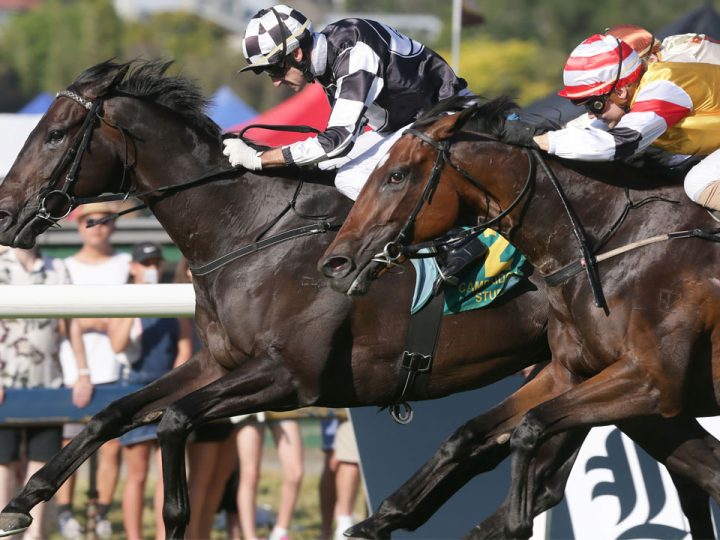 Kawi
Time restrictions have ruled Kawi out of the Queensland winter carnival.
Trainer Allan Sharrock has instead decided his multiple Group One winner will have two more domestic starts and then head to the spelling paddock.
“We thought about it, but if we went to Brisbane it would seriously limit us being able to get him back and ready for the spring,” he said.
Kawi will make the penultimate appearance of his current campaign in Saturday’s Gr.1 Haunui Farm WFA Classic at Otaki and then head back to Ellerslie.
“I’m very happy with him and his work this morning suggested he’s lost nothing and has gone forward,” Sharrock said.
“As long as he runs well – and I’m sure he will – then he’ll go to the New Zealand Stakes and that will be it for him.
“I think we’ll see the finished article next season as a mature six-year-old and we’ll be looking at a couple of races here and then Melbourne.”
Kawi has added Group One victories in the Makfi Challenge Stakes, the Zabeel Classic and the Thorndon Mile to his record this term, as well as the Gr.2 Manawatu Challenge Stakes.
Meanwhile, The Bold One has been retired after a brief but eventful career with his owners now looking to place him at stud.
“He was a very talented horse and obviously the wind operation and a couple of other issues didn’t help him – I’d definitely send a mare to him,” Sharrock said.
A son of Fastnet Rock and the dual Group One winner The Jewel, The Bold One won four of his 14 starts and was stakes-placed.
”Who knows what he could have been if he hadn’t had any problems,” Sharrock said. – NZ Racing Desk.