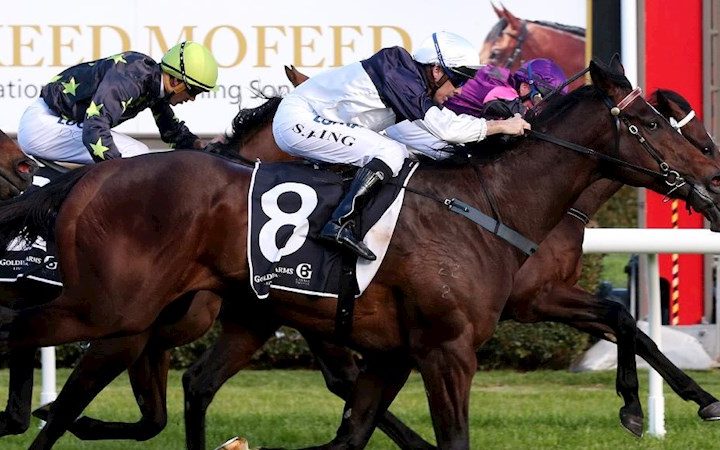 Celtic Tiger
Feature three-year-old spring staying races could be on the agenda for Celtic Tiger (NZ) became his late sire O’Reilly’s 82nd individual stakes winner when he upstaged his more fancied rivals in last Saturday’s Listed $100,000 Morphettville Guineas (1600m).
Specked from $26 into $21 on track despite going into the race a maiden, Celtic Tiger flashed home from the rear of the field to narrowly defeat fellow Victorian visitor Ayers Rock (Nicconi) on the line in the Listed feature.
Steven King, having his first ride on Celtic Tiger, said the horse could develop into a handy stayer given the way he relished the step up from the 1400m to 1600m on Saturday.
“He’s a real mile and a half horse,’’ King said on returning to scale.
Celtic Tiger was taken back from his wide barrier in a race that had a surprise leader, Prince Of Pagoda (NZ) (Zabeel), before Ayers Rock zoomed around the field mid-race to find the lead.
Ayers Rock and rider Darren Gauci looked to have pinched the race before Celtic Tiger squeezed between horses and dived late for a thrilling nose victory.
“I didn’t have too many other options than to ride for luck and he was strong on the line,’’ King added.
And despite the narrow margin, King was confident they had claimed the prize.
“There wasn’t much in it but he was really strong late and he was probably a half-length in front of the second horse a stride after the post.”
Back to all news
SHARE
Recent News