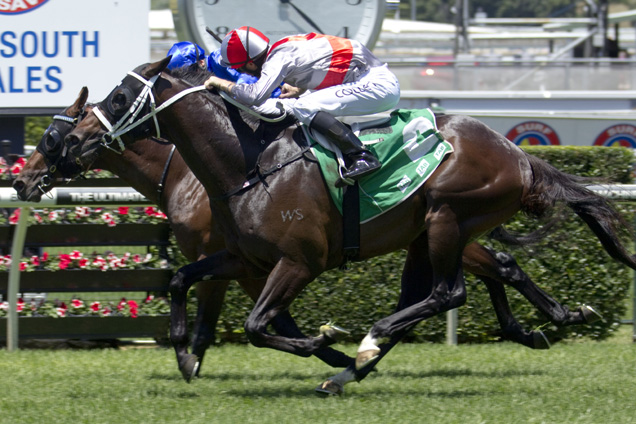 Torgersen (Jason Collett, outside, red & grey cap) wins at Randwick on December 5, 2015 - photo by Martin King / Sportpix - copyright
A change of scenery has been fast-tracked Torgersen’s return to top form. The WS-bred and sold son of Pins broke a lengthy drought when he was successful on the Gold Coast this afternoon.
Trainer Chris Waller’s decision to send the five-year-old to his Queensland stable proved a masterstroke following the gelding’s success over 1400m, his first for nearly two years. “Obviously at his best, he would be hard to beat in races up here, but after he got beaten in a restricted race at Doomben first-up we decided to try some different tactics,” said former Kiwi trainer Paul Shailer, who runs Waller’s Gold Coast operation. “We have had him over the jumps and working off a pony. It seems to have done the trick.”
Torgerson, who has won four races and a three-year-old placed in the Gr.2 Tulloch Stakes and in the Gr.3 Frank Packer Plate, was bought out of WS’s 2014 Premier Sale line-up at Karaka for $170,000. He is a son of the O’Reilly mare Oh So Glam, a half-sister to the multiple Group One winner’s Glamour Puss and Vision And Power.
Back to all news
SHARE
Recent News