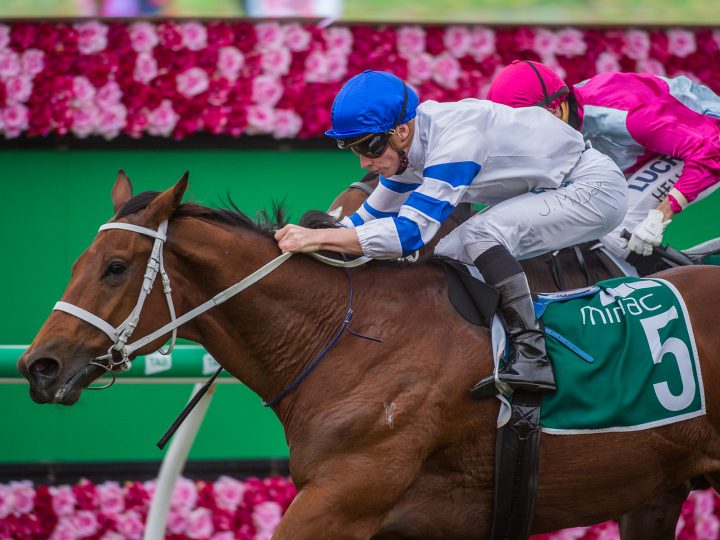 He is a rising star for trainer Chris Waller and was outstanding at Eagle Farm where he didn’t have any favours in the running.

From an awkward gate, rider James McDonald was caught three wide at the back of the field before improving near the turn.

It made no difference to Kolding and he produced a sustained run to the post to win in fine style, notching up a fourth consecutive victory.

Waller has already identified Kolding as an ideal candidate for the Gr.1 Epsom Handicap.

“I think he’s the right horse to go through to the spring. An Epsom type of horse in my opinion,” Waller said.

“He’s owned by the same interests as Rangirangdoo who won that race and this race looks a good launching pad.”

Waller said a gelding operation had worked wonders for Kolding.

“It’s been the making of this horse. He’s four from four since he’s been gelded,” Waller said.

“Gelding them changes their attitude markedly. They forget about what’s going on in terms of fillies and they concentrate on their racing.

“They actually become nicer horses too. They start enjoying life and it’s certainly been the turning point for him.

“Prior to being gelded he had the ability but didn’t want to be a racehorse.”

A $170,000 Karaka purchase from Wentwood Grange’s yearling draft, Kolding is a son of the Danzero mare Magic Star, who is a half-sister to the dual Group Two winner Make Mine Magic.

Magic Star is also the dam of the Gr.2 Awapuni Gold Cup winner Sampson and the Listed winner Miss Upstart.

In a rich last two months, Ocean Park has produced 26 winners including 10 on Premier days and 14 in Australia.