Colchester throws formbook out the window with gutsy win 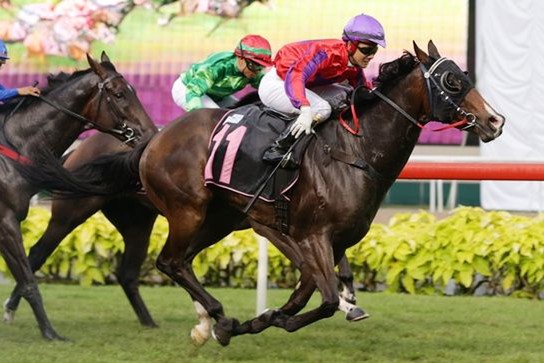 Punters were blown out of the water when Colchester (NZ) (Rios) defied his mammoth odds of $372 to take out the penultimate event, the $80,000 Class 3 race over 1400m on Sunday.

Market prices aside, the New Zealand-bred five-year-old son of Rios was also defying the mediocre runs he put in at his three starts for trainer Mohd Yusof at Kranji– 10th, 10th and eighth.

If a form analyst worth his salt scratched even further, his preceding brief and uneventful career in Hong Kong (12-8-12) would most probably put him or her off even more.

On the other hand, his original New Zealand career, granted in the less competitive South Island area, did give the impression the Lucky Stable-owned gelding could go on to better things when exported to other countries.

In five starts, Colchester, named after an Essex town noted for being the birthplace of nursery tales Humpty Dumpty and Twinkle, Twinkle Little Star, won three races between 1200m and 1400m.

An assiduous form student, Yusof did take cognizance of such statistics when Colchester landed in his yard last August, praying it would be the early part of the his racing career that would be reproduced at Kranji.

After three ordinary runs, the Singapore veteran handler was close to accepting the gelding had left his best form in New Zealand – but neither was he totally writing him off just yet.

“I think he’s a horse who needs to be alone in front. Today, I told CC (Wong Chin Chuen) to go forward or sit in second if another horse insists for the lead,” said Yusof who was at a rare double (Joyous scored earlier) to bring up his fifth 2018 success, a laudable effort given his small team of horses.

“When the horse in front (Show Far Show Good) took a big lead, I was happy to see my horse settle in second spot.

“I still wasn’t sure if he could win because his record in Hong Kong was not very good. In New Zealand, he won but I was going more with his more recent record.

“Thank you to the Lucky Stable, Mr Ng and his racing manager Richard See for their support.”

Wong jumped off, looking pleasantly surprised with how a meeting that was shaping up as a drab day (his two previous rides ran unplaced with Colchester an unlikely horse to save his day) ended on an unexpected victorious note.

“I rode the horse in trackwork and he showed me nothing. Mr Yusof just asked me to ride him positive today and it’s paid off,” said the Penang-born two-time Singapore champion apprentice jockey.

“I was happy when the leader (Show Far Show Good) opened up to a big lead. It gave me the chance to settle in second place after being caught wide (from barrier No 9).

“He was quite one-paced in the straight, but he just kept at it. I think he can go further.”