Coldplay back in fine style 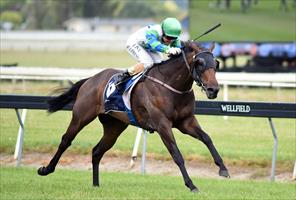 Coldplay hit the perfect note when she resumed at Ellerslie thon Saturday. The daughter of Savabeel returned from a seven month break to defeat a competitive field of Rating 75 sprinters in the hands of Vinnie Colgan, who sported the WS colours.
Trained by Murray Baker and Andrew Forsman, she met and matched the best of her age group last preparation. She won the Gr 3 Eulogy Stakes and subsequently finished fourth at Group Two level in both the Eight Carat Classic and the Sir Tristram Fillies’ Classic.
Coldplay is a half-sister to the multiple winner Cold Snap (Pins) with their dam the O’Reilly mare Forty Two Below. She is a sister to the Group Two winner The Big Chill.