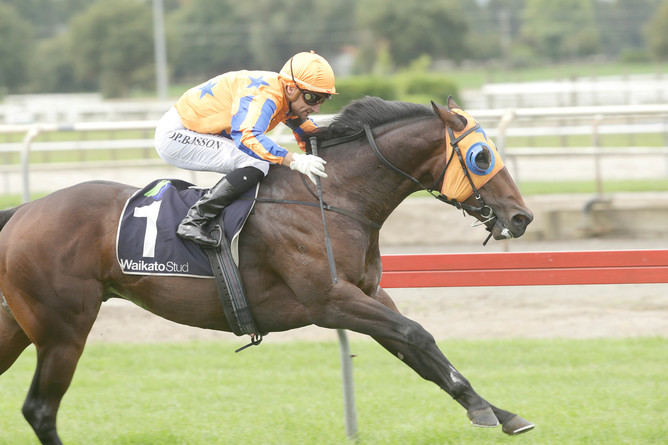 Emotions ran high in the Matamata birdcage after Byzantine won Wednesday’s two-year-old event in the hands of Opie Bosson.

Jockeys wore black armbands in respect of the recent passing of Gloria Autridge, whose son Stephen trains the successful son of Savabeel in partnership with Jamie Richards.

“It means a lot to me to win this race in memory of Gloria, she was a big part of my life growing up,” Bosson said.

Byzantine made the running in the Paul Jones 1200m before he was headed at the top of the straight by So Taken, but when Bosson asked for an effort from his charge they drew clear to account for the favourite Santa Catarina and Sahar.

“He got easy sectionals across the top and really quickened up for me,” Bosson said.

Byzantine was the only runner in the line-up with race day experience, having finished second on debut at Trentham earlier this month.

“He’s a lovely colt who went through some growing pains and was shin sore in the summer. He might be a 2000 Guineas colt,” Richards said.

“The trip away (to Trentham) helped him and it’s very fitting to win this race. It’s been a tough week for the stable and Opie and Steve are pretty close.” – NZ Racing Desk.