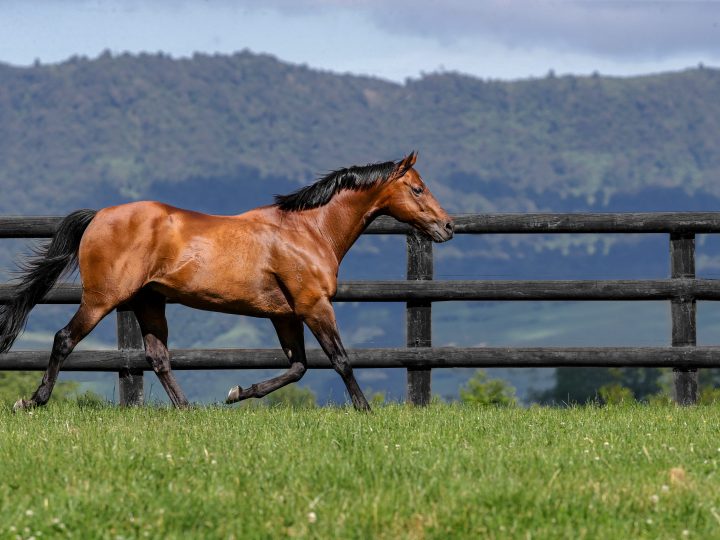 Pins
Kevin Gray was given encouragement on Saturday to raise his sights with his in-form staying mare All In Vogue.
The Palmerston North horseman has her in the Gr.3 Wallaceville Estate Wellington Cup (3200m) and she did her prospects of a start no harm with victory in the Listed Cambridge Thoroughbred Lodge Wanganui Cup (2040m).
A past visit to Trentham indicated that All In Vogue could cope with the extra distance of the staying feature on January 20.
“She’s nominated and she’s already run a mile and a-half well there so the two miles may not be a problem,” Gray said.
He was referring to All In Vogue’s second placing behind Rock On, a winner at Otaki on Friday, in last season’s Listed New Zealand St Leger (2500m).
A daughter of Pins and the multiple Group One winner Tall Poppy, All In Vogue was given a sweet run near the pace at Wanganui by Leah Hemi and they came with a well-timed run to take the day’s main event.
Gray had been in a confident pre-race mood following the five-year-old’s bold showing to finish runner-up in the Waverley Cup (2200m) at her previous appearance.
“I thought she went a top race and the track today was perfect for her and she had the right weight,” he said.
Blathwayt came home strongly to take second money from Balham, who is now likely to head north for the Gr.3 Skycity Hamilton Waikato Cup (2400m) in a fortnight’s time.
Back to all news
SHARE
Recent News