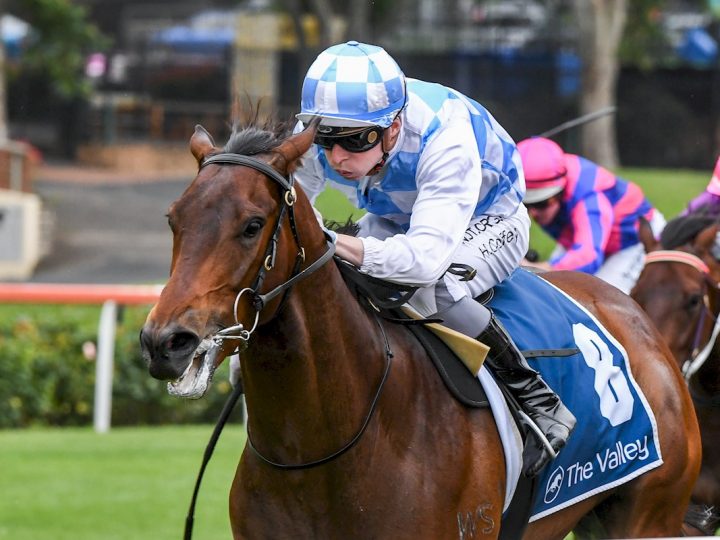 Waikato Stud home-bred Ocean Beyond completed a winning double for Waikato Stud at The Valley this afternoon when he kept his unbeaten record intact after success in the Listed McKenzie Stakes.

The 3-year-old is a son of resident stallion Ocean Park, whose daughter Ocean’s Thirteen had struck earlier in the day for trainers Ciaron Maher and David Eustace.

Ocean Beyond has been a favourite of trainer Daniel Bowman’s for some time and he didn’t hesitate to take on stakes company off the back of a debut win in a Geelong maiden.

“You don’t see our stable do this very often and it paid off. Ever since we gave him his first gallop we knew he went well and it was just a matter of looking after him,” Bowman said.

Partnered by Harry Coffey, Ocean Beyond jumped well to sit outside the leader and proved too strong for in the run home.

Ocean Beyond was withdrawn from the New Zealand Bloodstock National Yearling Sale and then failed to meet his $60,000 reserve when offered through Ohukia Lodge’s draft at the Ready to Run Sale at Karaka.

“I liked him at the Sale, although his breeze-up wasn’t impressive and just did a lot wrong. Bit I liked the animal,” Bowman said. “He had a throat issue and was passed in and Waikato Stud was good enough to take him home to get over it.

“A couple of months later we bought him and brought him home. We’ll tip him out now, he’s still very feminine and fine and a bit of filling out to do.

“We’ll give him a spell and get him back for the autumn, now his rating his up we can some targets.”

Ocean Beyond is out of Frankly, who is a sister to the Listed Lightning Handicap winner and sire Keano (and their dam is a half-sister to the champion sire O’Reilly.

Waikato Stud will offer Frankly’s Savabeel colt as Lot 412 at Karaka in January.