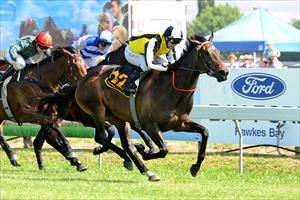 Roydon Bergerson is racing against time to have Savaria in top order for a trip to Riccarton.
The Awapuni trainer, like the majority of his profession, has been frustrated by the persistent wet weather in preparing his spring team headed by the Group One winner.
“It just won’t stop raining,” Bergerson said. “I’ve got six or seven ready to go and waiting for the good tracks.”
A New Zealand Oaks winner at three, Savaria holds a nomination for the Gr.3 Christchurch Casino New Zealand Cup. She hasn’t raced since she was unplaced in the Gr.1 Livamol Classic, but did trial satisfactorily at Waverley last Thursday.
“She won’t go on anything worse than a dead track,” Bergerson said. “We had to give her a chance in the Group One at Hastings, but she was struggling in the ground from the start.
“She’s well and she’ll go south if we can get another start into her. Hopefully, that will be in the Feilding Cup.”
The Ricoh-sponsored Listed feature at Awapuni on Saturday is Plan A with a possible Plan B the Listed Gold Metropolitan Trophy Handicap on the opening day of the Riccarton carnival a week later.
Another promising member of the stable sitting in the wings for a break in the weather is Beefeater.
“He’s a good horse and he’s waiting for the better tracks,” Bergerson said.
Beefeater, who has had two trials since a spell, has won three of his seven starts and he has yet to finish out of the money. He holds a nomination for the Gr.2 Coupland’s Bakeries Mile. – NZ Racing Desk.
Back to all news
SHARE
Recent News