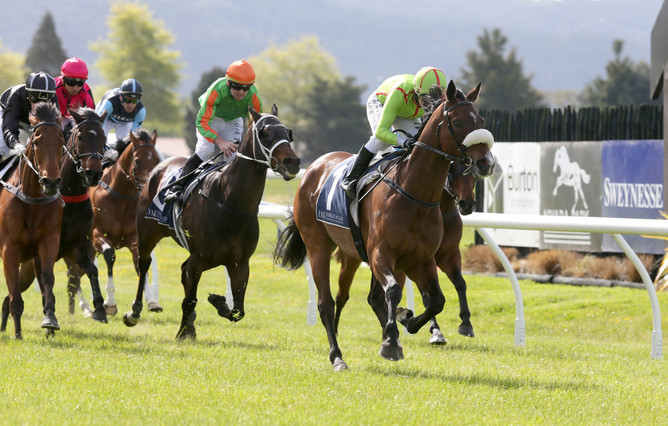 A lengthy wait for the Cruz family came to an end at Rotorua where Packing Eagle showed what he is capable of given the right conditions.
The Waikato Stud-bred and sold gelding brought his Hong Kong form to Saturday’s meeting with a sterling performance to trounce his rivals in the Gr.3 Sweynesse Stakes (1215m).
“We’ve been waiting for a decent track and finally he was able to do what we thought he could,” said Trevor Cruz, who trains the son of Pins with his brother Martin for their mother Angel.
“He had to rediscover his form and he showed today that’s he’s still got the fight.”
Packing Eagle won six of his 19 starts in Hong Kong as Packing Pins and ran third in the Gr.1 Champions’ Mile (1600m) at Sha Tin for trainer Ricky Yiu before he joined the Cruz siblings’ Cambridge operation.
He had been unplaced in his first two starts for them on heavily rain-affected tracks before Rotorua provided him with a stage to showcase his talent.
“He races particularly well on right-handed tracks and we’ll keep him to 1200 and 1400m, a mile might be a stretch for him,” Cruz said. “Ideally, we’ll look for weight-for-age races for him.”
Packing Eagle raced close to the pace on Saturday and he surged clear in the run home to have two and a half lengths on last year’s winner Scapolo at the post.
“He sits nicely off the speed and that’s how he’s raced best in Hong Kong,” Cruz said.
A serious horse was how rider Trudy Thornton described the seven-year-old.
“He felt amazing on the better surface, he’s a very powerful galloper,” she said.
Packing Eagle’s younger half-brother Splurge was sent out favourite, but he was never a factor and beat only two runners home.
Back to all news
SHARE
Recent News