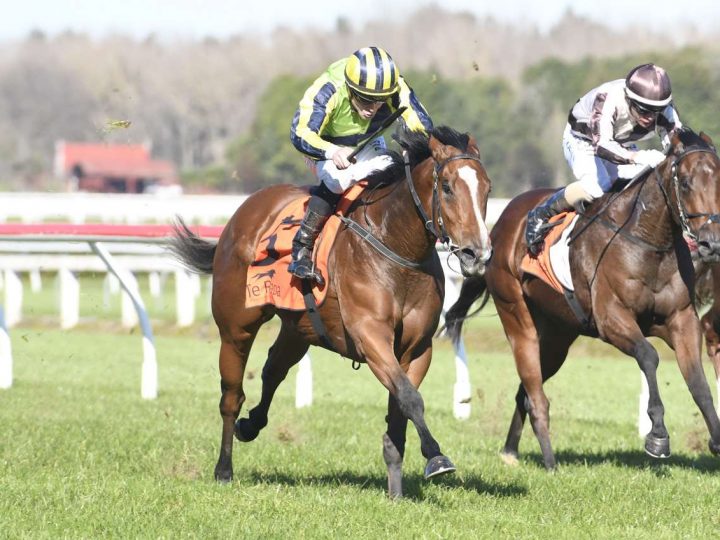 Waikato Stud had the winning say in the new season’s first two-year-old race at Wanganui this afternoon.

Farm graduate Sai Fah showed his will to win when he rallied strongly to claim top honours.

The son of Rios had taken charge soon after straightening and fought determinedly after being headed 200m from home.

“He’s a relaxed horse and it was a very game run. He looked well and truly beaten before he kicked back.”

Sai Fah was a NZ$6000 weanling purchase at Karaka for the Mission Downs Trust and is a brother to the winner Gothenburg.

They are sons of Rongonui, who is by Fast ‘N’ Famous, from the family of the Gr.1 South Australian Derby winner Shiva’s Revenge and the Gr.1 AJC Oaks winner Just Now.

At Riccarton, the home-bred Morse Code resumed in a blaze of glory to account for her open handicap rivals.

The Michael and Matthew Pitman-trained Pins mare is out of Really Reputable, by O’Reilly.

Morse Code was a $9000 Karaka purchase for her part-owner Tom Perry.

She is a sister to the Group performer Florence Jean from the family of the Australian Group Three winner Stickpin.

Not to be outdone, champion stallion Savabeel delivered another stakes victory at Wanganui where when his daughter Peaceful won.

She claimed top honours in the Listed O’Leary’s Fillies’ Classic to confirm a trip to Australia.

Her main aim is the Gr.1 Caulfield Guineas and is likely to run in the Gr.3 Guineas Prelude on September 30.

Meanwhile at Te Awamutu on Friday, Taree’s debut victory may have come at long odds, but it was no surprise on pedigree.

The Waikato Stud graduate won at the first time of asking at odds of 36-1.

A daughter of Pins, Taree is out of the O’Reilly mare Blush who is a three-quarter sister to the Gr.3 winner Bashful.

Also featuring in the pedigree is the multiple Group One winner Fair Sir.