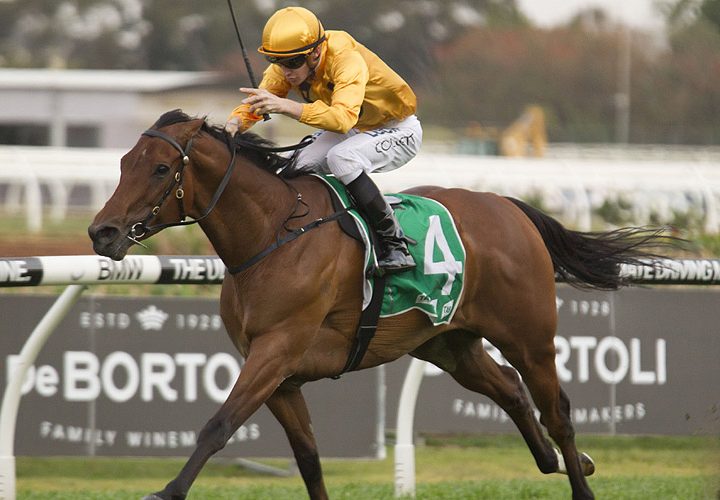 Sir Plush (Jason Collett) wins at Rosehill on September 23, 2017 - photo by Martin King / Sportpix - Copyright
An avalanche of money for Sir Plush proved spot on after the Bjorn Baker-trained galloper was never headed in the Bowerman’s Office Furniture (1400m) at Randwick on Saturday.
Backing up seven days from a dominant 3-3/4 length win at Rosehill, Sir Plush was crunched from $3 into $2.25 on course before holding a gallant Mighty Lucky ($11) at bay by three-quarters of a length.
Rider Jason Collett, who now boasts four wins and three placings from eight rides on the son of Pins, said he knew on Tuesday morning his mount would be hard to beat again but was given a brief fright pre-race.
“He charged towards the rail and then quickly turned which threw me off balance a bit,” Collett said.
“His usual strapper wasn’t there today so that might have had something to do with it but when I galloped him on Tuesday he was flying so we were pretty confident today.”
Now eight runs into a campaign that started in June, Sir Plush has earned more than $207,000 for connections but Baker is reluctant to send the horse for a spell just yet.
“He’s had a long preparation but he’s just getting better and better,” Baker said.
“There’s no form like winning form.”
Former New Zealand-based gelding All Our Roads ($14), making its Australian debut for the Chris Waller stable, finished a long neck behind Mighty Lucky in third.
Story from Racenet.com.au
Back to all news
SHARE
Recent News