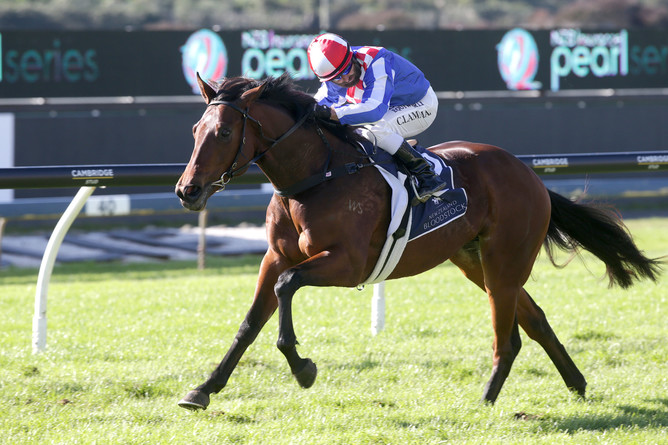 Shoshone has posted a first winning strike for Waikato Stud stallion Sacred Falls with a dominant display this afternoon at Ellerslie.

The Ken and Bev Kelso-trained filly eased any fears about handling a wet track to score a hollow victory.

“It was great to get that win in such good style,” principal Mark Chittick said. “She’s a home-bred filly as well.”

Chittick is expecting the progeny of Sacred Falls to be a major force to be reckoned with in the new season.

Sacred Falls has proved immensely popular with breeders since his retirement to the premier Matamata farm.

He has only had 12 runners, five of those placing before his daughter Shoshone struck.

“Sacred Falls has served very good books and he’s had a number of trial winners, plenty of them showing a lot of talent,” Chittick said. “Everybody who have them are very happy.

“We’re going into winter now so it’s probably going to be a bit on hold and we are really looking forward to his spring three-year-olds.”

Shoshone was a $150,000 Karaka purchase and signed for by co-trainer Ken Kelso and Waterford Bloodstock.

The filly is out of Dee I Why, who is a three-quarter sister to the Listed New Zealand St Leger winner Ritzy Lady.

“It’s that O’Reilly-Zabeel cross that has worked so well,” Chittick said.

The family boasts an international flavour through the presence of the Group 3 South African winner and Group 1 performer Hancock Park.

She is the dam of the Group Two winner Park Lane, also placed at the top level.

While there was pre-race concern about Shoshone handling the track in the New Zealand Bloodstock Insurance Pearl Series Race, there was no doubting the confidence in her talent.

“I like the filly a lot, she’s got a lot of ability, but there was a question mark about the track,” Kelso said.

“She was very impressive and she’d showed a lot at home and at the trials. We’ll give her a break now and then look at the early three-year-old races. I really rate her.”

Shoshone was a trial winner in the spring before a break and in her latest trial she finished runner-up behind subsequent Listed Futurity Stakes winner Rhaegar.

“She’s out of a Zabeel mare so she’ll only improve,” Kelso said. “She’s an exciting prospect going forward.”

Shoshone was quickly into stride to sit outside the leader and she kicked away strongly to win with ease.

“She didn’t like the track, but she was the best horse in the race,” winning rider Cameron Lammas said.

“She’s a classy filly and jumped out to put herself there and then relaxed.”

Sacred Falls was an outstanding galloper who won four Group Ones including two editions of the Doncaster Handicap, a George Main Stakes and the New Zealand 2000 Guineas.