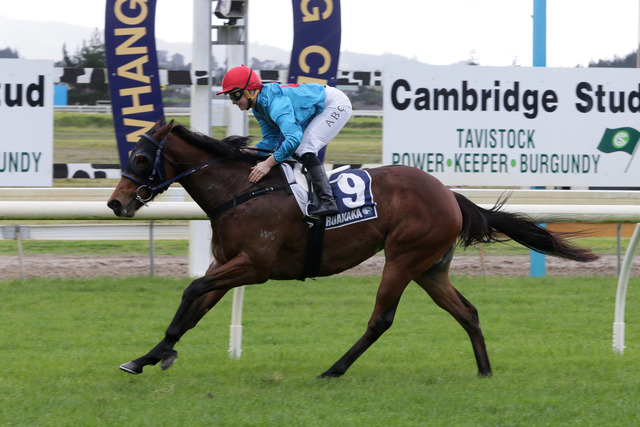 Dashing filly Florence Jean has booked at least one appearance at the Hawke’s Bay spring carnival. Owner-trainer John Morell was unsure before today’s outing at Ruakaka whether the WS-bred and sold daughter of Pins would be taking on the best of her age group in the new season, but he has no doubts now.
Florence Jean thumped her rivals in the Tavistock Owners’ Syndicate 2YO on her return to racing and the Gr.3 Hawke’s Bay Breeders’ Gold Trail Stakes is now a target with the possibility of a lead-up run on the first day of the Hastings meeting, “We’ll see what happens, but we will be looking at those races,” Morell said. “It’s been hard to get a line on her at home. She’s only had a couple of runs and she doesn’t put in a lot, but once the blinkers are on her she is a different horse.”
Florence Jean had also won at Ruakaka on debut in January and she was then an unlucky sixth in the Gr.2 Matamata Breeders’ Stakes. “She got flattened at the start so she still went a good race and we turned her out after that,” Morell said. “She’s had a couple of setbacks, one was a foot abscess, so there’s still a lot of improvement in her.”
Florence Jean was sent straight to the front at Ruakaka by regular rider Alysha Collett and the filly bolted clear in the straight to win by six lengths. “She jumped well and there wasn’t a lot of early pressure,” she said. “She was too good and had her ears pricked on the line. She’s strengthened and she’s a little professional.”
A sister to the multiple winner Morse Code, Florence Jean is out of the O’Reilly mare Really Reputable. She is a half-sister to the Australian stakes winner and Group One performer Stickpin.
Back to all news
SHARE
Recent News