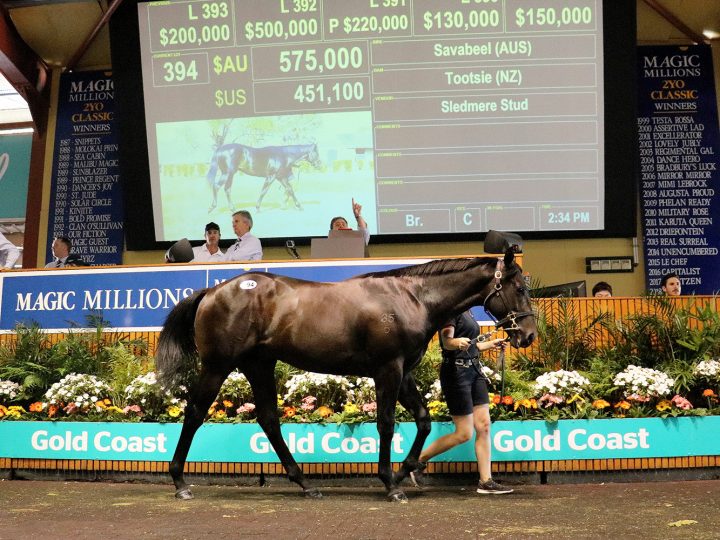 The international pulling power of WS’s Savabeel has been highlighted on the Gold Coast this week during the Magic Millions Sale.

Top Sydney trainer John O’Shea was taken by a son of Savabeel and dug deep to get him for A$450,000. The colt is out of the unraced O’Reilly mare Sparkling, a half-sister to the multiple Group One-winning sprinter Sacred Star and also closely related to star three-year-old Embellish, winner of the Gr.1 New Zealand 2000 Guineas.

Brendan and Jo Lindsay, soon to take over Cambridge Stud, went to A$425,000 for the Savabeel filly from
Splits. The mare is an unraced daughter of O’Reilly and the two-time Group One winner Legs (Pins) and this is the family of the champion New Zealand three-year-old
Xtravagant.

Trainer Paul Perry got in on the Savabeel action this afternoon when he made the final bid of A$300,000 to land the colt out of Candelabra. The youngster’s dam is a half-sister to the Group One winner Diademe and is another from the family of Embellish, who will stand at Cambridge Stud when he finishing his racing career.

The Savabeel colt out of Baby Shacks will be heading to Victoria after he was purchased by the powerful Lindsay Park operation for A$170,000. His mother is an unraced O’Reilly mare who is a sister to the stakes winner Vigor, Joey Massino and Vincent Mangano.