Grunt spelled ahead of lucrative Spring 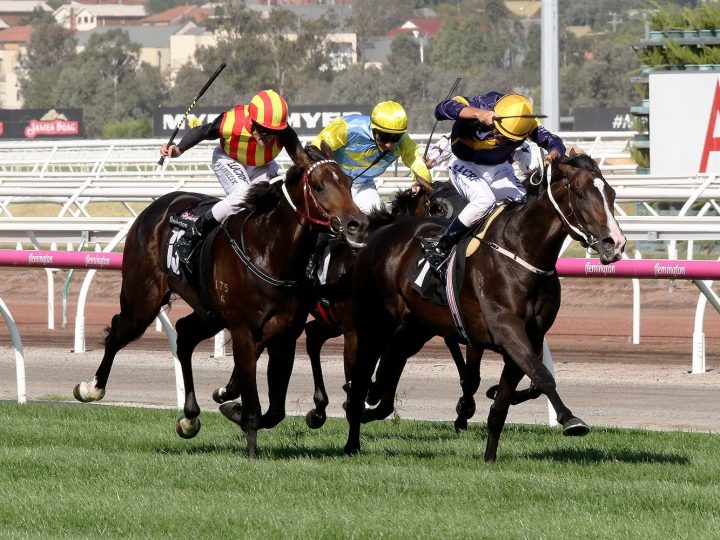 Talented three-year-old colt Grunt will now head to the spelling paddock in preparation for the spring after securing his first Group One win when victorious in the Australian Guineas (1600m) at Flemington on Saturday.

After placing behind Aloisia and Salsamor on debut as a two-year-old, Grunt has not been beaten in four subsequent starts.

The well-bred son of O’Reilly provided a preview of what was to come when winning the Gr.3 C.S. Hayes Stakes (1400m) a fortnight ago, and he has now proven he is one of the best of his generation with a strong Guineas victory.

Trainer Mick Price did flirt with the idea of sending Grunt to Sydney to tackle the Gr.1 Rosehill Guineas (2000m), but has elected to send his runner for a spell in preparation for what could be a lucrative spring campaign.

“It’s mission accomplished so he can have a nice break,” Price said. “He’ll be a better horse as he gets older, no doubt.

“I’m really happy with him and I probably could go ahead with him, but I’m thinking of his future.”

“If I have to circle a race that I would love to win with him it would be the Cox Plate, he’s got a lot of options in front of him.

Grunt was bred by Trelawney Stud and sold in their 2016 New Zealand Bloodstock Premier Yearling Sale draft to Mick Price and bloodstock agent Cameron Cooke for $220,000.

“He was a nice colt, not unlike a lot of O’Reilly colts,” Trelawney Stud Managing Director Brent Taylor said. “He was a rawish sort of yearling, he was a good moving horse and he had a lot of quality to him. He demonstrated at the yearling sale that given time he could develop into a lovely colt.

“He’s a horse that Mick Price advised us of his ability 12 months ago and said he thought he was a very good horse. We have all been patiently waiting for him to prove it and he has.

“I thought his run in the Group Three a couple of weeks ago was fantastic and drawing such a wide gate on Saturday, considering what he had to do I thought his win was quite dominant.”

Grunt was selected by bloodstock agent Cameron Cooke for Rupert Legh and a group of owners after some misfortune with a previous galloper.

“We actually had an O’Reilly three-year-old that had his first start with John Hawkes,” Legh said. “He had won by five lengths at Bendigo and the day after John phoned and said there had been a little mishap.

“He had a small bone chip in a hind fetlock and John said that it would only be a routine operation and they normally have a quick recovery.

“So he had the operation and unfortunately he had a heart-attack while he was under the anaesthetic and died.

“We were fortunate we did have insurance and then Cameron said he would go across to New Zealand to find a replacement for him. We did have a good O’Reilly and we have obviously replaced him with a better one.”

Grunt’s Group One victory adds to his impressive pedigree page ahead of a potential career at stud. Most notably his dam Ruqqaya is a half-sister to 2012-13 Australasian Champion Middle distance Horse of the Year and Gr.1 Cox Plate (2040m) winner Ocean Park.

“We raced Ruqqaya,” Trelawney Stud’s Brent Taylor said. “She actually had quite a bit of ability but she had a few limiting factors that they couldn’t get the best out of her, she’s produced two black-type horses now from the first three foals.

“We raced the Grandmother (Sayyida), she was a Broodmare of the Year. We are pretty excited about Ruqqaya’s opportunities going forward, another full-brother (to Grunt) is a two-year-old and is a lovely horse. So it looks like she is going to be a gem of a broodmare for us.” – NZ Racing Desk.