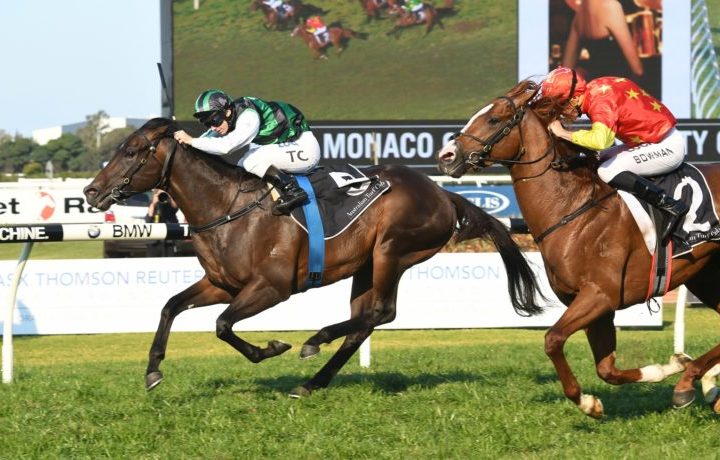 Kiwi colt Embellish is a graduate of the Matamata breeding powerhouse and was a $775,000 Karaka buy for Te Akau boss David Ellis. Winner of the Group 1 New Zealand 2000 Guineas in the spring, the colt has improved with his last-start sixth in the Group 3 CS Hayes Stakes.

“He galloped on the steeple grass this week and our main man there, Dan Miller, was very happy with him,” co-trainer Jamie Richards said.

Out of the O’Reilly mare Bling, Embellish is a brother to the Group 1 New Zealand Thoroughbred Breeders’ Stakes winner Diademe. It is also the family of the multiple Group One-winning sprinter Sacred Star.

Addictive Nature has won two of his six starts, including the Group 3 Ming Dynasty Quality, for trainer Bjorn Baker. He has had two runs back from a break and was a creditable fifth against the older horses in the Group 2 Apollo Stakes at his most recent outing. Another $775,000 Karaka yearling, Addictive Nature is a brother to the Group Two winner Savvy Nature.

The Aaron Purcell-trained Black Sail was sixth in the Group 2 Autumn Stakes in his Guineas lead-up.

He is a son of the English-bred Singspiel mare Ennerdale and a brother to the Group Three winner Éclair Big Bang.

O’Reilly’s son Grunt, a $220,000 Karaka yearling, looms as one of the major chances with a hat-trick of wins completed with success in the Group 3 CS Hayes Stakes.

“He’s also showed he likes Flemington and he will relish the 1600 metres and is even looking for further,” trainer Mick Price said.

Grunt is out of the Van Nistelrooy mare Ruqqaya, who is a half-sister to Waikato Stud’s exciting young stallion Ocean Park.