Healthy Sanasar a force to be reckoned with 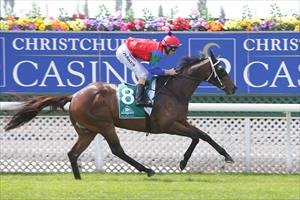 Graeme Rogerson is keeping his fingers crossed that Sanasar can remain injury free to reach the heights he believes the horse is capable of.
“He’s a very good horse and hopefully he can get back to what I think he’s capable of,” said the Tuhikaramea trainer, who prepares the Savabeel five-year-old with his wife Debbie.
Sanasar showed a glimpse of what the future may hold for him with a dominant victory in Saturday’s One Good Horse at the Avonhead Tavern Premier at Riccarton.
It was his fifth win from 19 starts and a return to the form that earned him Group One nominations a year ago for the Thorndon Mile and the Auckland Cup before he went amiss and was put aside for eight months.
Rogerson said Sanasar’s current condition was a direct result of the work of senior stable employee Michelle Northcott.
“She’s done a great job with him and she has to take all the credit.”
Sanasar was given a cosy run behind the leader in the trail by Johnathon Parkes and once a rails run presented itself in the straight they were through and gone.
“He was travelling hard on the bridle in the trail all the way and luckily for us a gap opened up on the fence,” he said. “He rounded it off really well.”
Sanasar shot clear to win by two and a quarter lengths from No Emotion, who came on strongly from last, and Lockett.
“There’s a Rating 85 over 1800 metres next Saturday for him and he’ll be hard to beat in that as well,” Rogerson said. – NZ Racing Desk.

In an Australasian first, Waikato Stud is offering buyers at New Zealand Bloodstock’s National Yearling Sale the ultimate pre-sale insight by disclosing the ‘on-the-market’ price for each yearling on the Kick Sales Platform. Mark Chittick …

Waikato Stud signed off from the Magic Millions Gold Coast Yearling Sale on a high when its Savabeel colt provided the Matamata farm with its highlight of the auction. The well-related youngster attracted widespread interest …