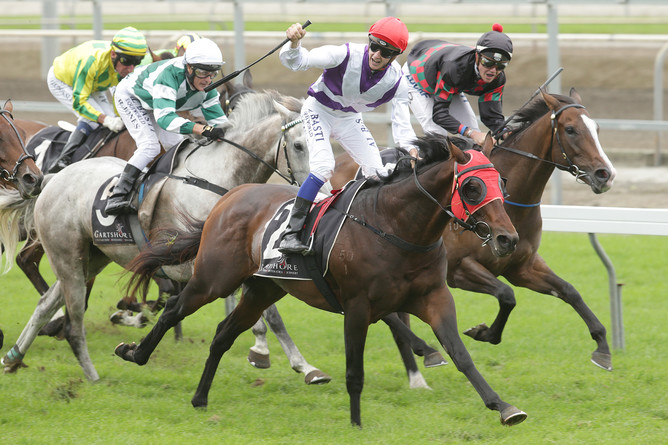 Gary Hennessy is preparing for another international tour of duty.

The Matamata trainer has his sights set on a Singapore Group One feature after receiving confirmation that Ocean Emperor has gained a spot in the Kranji Mile (1600m) on May 26.

Hennessy has a proven overseas track record having prepared Ocean Park for Group One wins in the Cox Plate (2040m), Caulfield Stakes (2000m) and the Underwood Stakes (1800m).

Also successful in the Gr.1 New Zealand Stakes (2000m) and the Gr.1 Makfi Challenge Stakes (1400m), the 2012-13 New Zealand Horse of the Year was raced by Hennessy with Andrew Wong and Steve Yan.

They also share in the ownership of Ocean Emperor, a $450,000 Karaka yearling purchase out of the 2013 Premier Sale draft of Waikato Stud, now the home of Ocean Park.

“It’s going to be terrific to be part of it,” Hennessy said. “We’ve done it before so we know what’s required.”

A son of Zabeel and the Group One performer Tootsie, Ocean Emperor has won seven races including a defeat of subsequent Group One winner Miss Wilson and the seven-time top-flight winner Kawi in the Gr.2 Tauranga Stakes (1600m).

At his most recent performance, the six-year-old downed multiple stakes placegetter Tiptronic and the Group One performer Travimyfriend in the Gr.2 Japan/New Zealand International Trophy (1600m).

“He’s pretty solid in condition, I’m really pleased with him,” Hennessy said. “He’s been on the treadmill most days since.”

He is now looking at his options to have Ocean Emperor in prime order for the trip to Singapore.

“He’s won well fresh before and there are the Te Teko trials at the end of the month and there’s a race meeting here at Matamata so he could gallop between races as well,” Hennessy said. – NZ Racing Desk.