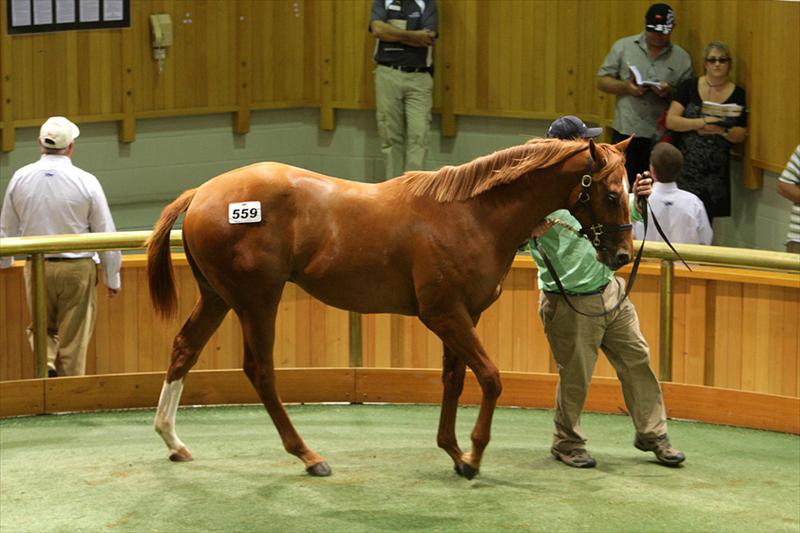 It was the turn of Fast ‘N’ Famous to fly the WS flag with pride at Karaka yesterday when a striking son of the Redoute’s Choice stallion topped the Matamata farm’s draft on the first day of the Select Sale. The bold chestnut took the eye of respected New South Wales-based agent Steve Brem who made the final bid of $260,000.
The colt is out of the winning Pins mare Silver Fern who is a three-quarter sister to the WS-bred and sold stakes winner and Gr 1 performer Raid and a half-sister to the Gr 1 Hong Kong Derby runner-up Jackpot Delight. The third dam is the famed Australian mare Emancipation and the family of top-flight winners Railings and Virage De Fortune.
Fast ‘N’ Famous’ barn-mate Savabeel also made an impact when his son made $170,000 to Victorian interests. The stylish black colt is out of the Centaine mare Zephuros who has a 100 per cent record at stud with all three of her foals to have having won. She is also a half-sister to the Gr 2 Surround and Tea Rose Stakes winner Glenview.
Top Sydney trainer John O’Shea took a shine to WS’s Danewin colt and secured him for $60,000. A half-brother to a winner, the colt is out of the O’Reilly mare Zink who won three times and was runner-up in the Gr 1 Queensland Oaks. A feature name in the pedigree is the multiple Gr 1 winner Prince Majestic.
The half-brother to multiple winner and Group performer Black Muscat by No Excuse Needed realised $46,000 to the bid of agent NZ Bloodstock. The colt is out of the Sound Reason mare Black Sugar and is from the family of the Gr 1 Chipping Norton and George Ryder Stakes winner Wong while high-flying Awapuni trainer Lisa Latta parted with $45,000 for the O’Reilly filly out of Activate. She is a half-sister to the Latta-trained multiple winner Jack’s Point (Pins).

No doubt about this colt

Doubtful Sound had an army of supporters at Ruakaka Wednesday afternoon and the red-hot favouritenever gave them a moment’s concern at he jogged to an effortless victory. Sent out at less than odds on following …

Savabeel heads the 2021 Waikato Stud roster as the leading Australasian sire ofStakes winners. Prudent stallion selection along with the development of exceptionalfamilies reared on the best-thoroughbred land in New Zealand has elevatedWaikato Stud into the position of strength …