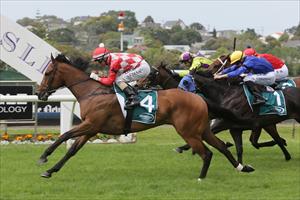 Lightly raced galloper Killarney provided another glimpse of his undoubted talent when he delivered an emphatic victory at Ellerslie on Saturday.
The statuesque four-year-old had been an impressive winner on debut back in September and was not disgraced in finishing to second to progressive mare Lizzie L’Amour at his next start. Trainer Roger James has a big opinion of the O’Reilly gelding and brought him to northern headquarters on the weekend with an eye to future challenges there over the summer.
Killarney didn’t disappoint as he dominated his rating 65 rivals over the concluding stages of Saturday’s Ellerslie Jewellers & Engravers sponsored 1200 metre contest despite putting in a few wayward strides during the run home.
James was pleased with the winning effort when questioned after the race.
“Ellerslie can trip the best of them up their first time or two,” he admitted.
“He is a big greenhorn but he has a lot of ability.”
That ability will be tested once again at Ellerslie with James keen on setting his charge for the final of the inaugural Dunstan Rising Stars Championship (1500m) on Boxing Day.
“I think we’ve got to look at the young Turks race now,” he said.
“I don’t know if he will cope with the 1500 metres but I will talk to Vinnie (Colgan) to see if that’s the right thing to do with him.
“I don’t think I’ve made a mistake with him so far as I’ve been patient with him. I don’t want to look short term but to the long term with him as eventually I think he could be up to the very best.”
James will be hoping the gelding, who he purchased at the 2014 Select sale at Karaka for $115,000, can match the Ellerslie deeds of his stakes winning dam Irish Colleen who registered four of her 7 career victories at the course. The mare was raced by current Auckland Racing Club Director Daniel Nakhle and his father Elias, who also share in the ownership of Killarney. – NZ Racing Desk
Back to all news
SHARE
Recent News