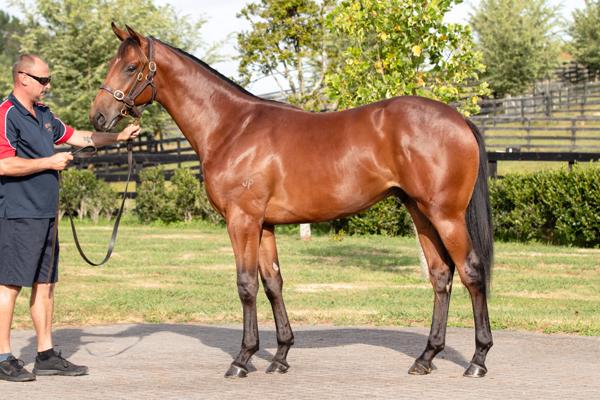 I Am Invincible colt Kinloch ran right up to his looks this afternoon with a powerful performance to knock off a competitive line-up of Benchmark 64 contenders on the Kensington track.

Part-owned by Waikato Stud, the good-looking three-year-old settled well back in the running before producing an irresistible finish from the top of the straight for the second win of his fledgling career.

He had finished runner-up on the course over 1100 metres at his previous appearance when resuming off a break and the drop to 1000 metres today was trainer Kris Lees’ only pre-race concern.

“It was a smart race and coming back in trip was a concern, but he’s a smart horse,” Lees said. “Once he got clear air he let down strongly.”

Kinloch was purchased out of breeder Jamieson Park’s draft at the New Zealand Bloodstock National Yearling Sale by agent Bruce Perry, who is also in the big ownership team that includes Mark and Garry Chittick, Jomara Bloodstock and Jamieson Principal James Chapman.

“They are a really good syndicate to train for and this horse has got a bright future. He’s a genuine Saturday horse who still does a few things wrong, but he’s going the right way,” Lees said.

Kinloch was ridden two runs back by James McDonald, who made the wise decision to stick with the ship this afternoon.

“It’s good to get a win, they are a good ownership group. Bigger things are in store for the horse and he’ll be competitive in a Saturday race for sure, he’s got a really good turn of foot,” he said.

Kinloch is out of the More Than Ready mare More Beautiful, who won five races and is a half-sister to the G1 WATC Derby winner Grand Journey and to the dam of the G1 Galaxy H. winner Griante.