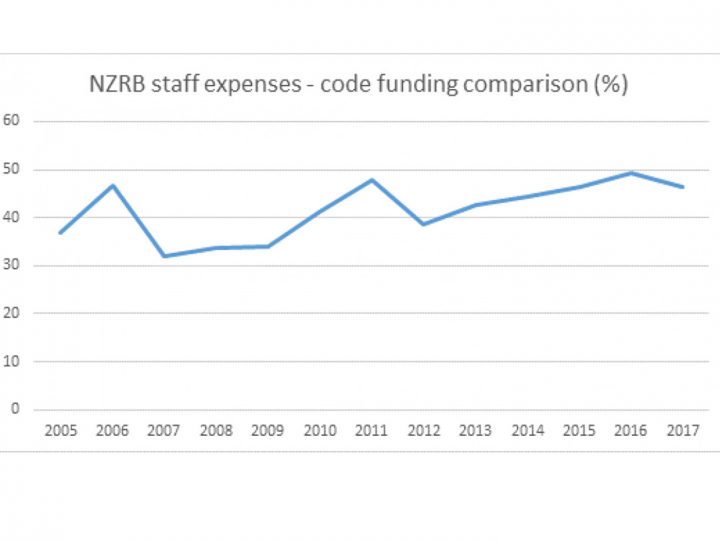 NZRB CEO John Allen left as many questions unanswered as answered when he appeared on the Q+A programme.

Owen is not famous for her racing knowledge but she is highly acclaimed as a current affairs journalist with a strong interest in social history. She tackled the subject with some gusto and was well briefed before her interviews with John Allen, Winston Peters and trainers Murray Baker and Tony Pike.

When Owen spoke with NZRB CEO John Allen and quoted criticism she had heard about the spike in NZRB employee numbers and overall costs to today’s level of more than $204 million, Allen looked less than comfortable in making this reply: “This issue that the TAB is top heavy and people at the TAB are being paid too much has been with the TAB as long as there has been a TAB.

His assertion on national television that the TAB isn’t top heavy and employees are not overpaid, and that has always been a misconception about the TAB, was enough to raise this writer’s greying eyebrows. The figures had to be checked, of course.

Let’s give Allen the benefit of the doubt and not call the remark a blatant mistruth but instead a kneejerk response to an unexpected question from a very bright current affairs journalist. Allen’s answer is perhaps best described as a throw at the stumps that missed by 10 metres and went for four overthrows.

The truth of the matter is that salaries at NZRB have risen at a far greater rate than any other expense. Two Years after the Racing Act of 2003 came into being, the 2004/05 annual report shows that salaries at NZRB were $24.42 million in a season that returned $66.21 million back to the three codes. So salaries were 37 per cent of the return figure.

By season end 2015/16 salaries had risen to $66.8 million and the distribution to the three codes had risen to $134 million. The salaries to distribution ratio in those 11 years had risen from 35 to 49 per cent. Salaries and staff numbers which by then had risen to 855 were clearly out of control in an industry that the NZRB had failed to recognise was lapsing into a state of decline. The figures don’t lie.

Some interesting aspects emerged after reading and then re-reading a succession of annual reports. It’s not as exciting as watching cricket or rugby or Winx win a Cox Plate, but it is nevertheless rewarding when anomalies are discovered.

For example, the NZRB annual report of 2006/07. That was the year when Chairman Michael Stiassny wrote his Chairman’s Report with a glowing result for him which went thus: “On behalf of the Board, I am pleased to report the New Zealand Racing Board has achieved record growth for the 2006/07 year. Turnover increased 5.2 per cent to $1.436 billion and operating surplus was $121.7 million, up more than 40 per cent on last year.”

But Stiassny had been in charge for only the final seven months of that racing season. The record profit was entirely due to the then Minister for Racing Winston Peters’ initiative to remove betting tax duties – in the 2005/06 season the NZRB had paid $44.2 million in betting duty, but when Peters took over the portfolio in 2005 he achieved a great result for racing, had the duty greatly reduced by placing it on equal footing with gaming taxation, and a year later the betting duty paid was down to $10.3 million – a saving of just on $34 million for the season.

Could the removal of the remainder of that nonsense betting duty be the tax-break Peters will give the industry in this week’s budget?

The result for 2006/07 season was indeed a record – a year in which NZRB salaries came in at $28.9 million and $89.3 million was returned to the codes. The ratio of salaries to distribution-to-the-codes was reduced to 32 per cent. This was the same year that showed cash reserves of $105 million and interest earned on that money was more than $6 million.

So, with the Peters betting duty relief in place and contributing an increasing amount on an annual basis, how did the governance at NZRB allow the costs to spiral so dramatically in the ensuing nine-year period which saw the salary/distribution to the codes ratio increase from 32 per cent to 49 per cent? Could it be simply mismanagement?

In the annual report of 2016/17, the stated figure for salaries was reduced to $63.6 million while the distribution to the codes came in at $137.5 million – a ratio of 46 per cent. But other figures found in that annual report are disturbing relative to the declining state of the industry.

For example, why in the ‘Other Expenses’ notes on page 55 is the figure for ‘consultancy’ as high as $2.1 million (or $40,000/week)? Also, Travel and Accommodation is just on $3.2 million or $61,000/week. Although in ‘notes’ to the financial statements they give no explanation. Similarly, ‘other operating expenses’ appear in ‘Other Expenses’ and the figure of $2.5 million ($43,300/week) also lacks any explanation.

Not one of these items could have been questioned at the last AGM because the annual report was released only after the meeting took place. Most people attending the meeting sat like pillars of stone, said nothing and offered only sporadic applause for the speakers.

Today, with the previously mentioned cash reserves gone, and now borrowing money for stakes and paying interest instead of earning it, the Messara review might be a last-minute reprieve. The industry needs not just change but a massive shake-up – administrative roles need to be vacated and the sooner the better.

Racing is now looking for a watershed moment to be instigated by the Minister on the back of the Messara review – by July or even sooner. No other options are available and racing will soon travel on a road never previously taken.

The more positive aspect emerging from the respected Q+A programme is that it came from a source outside the racing industry which saw the need to ask the same hard questions that The Informant has been asking for a long time. This racing industry has not only been ignored by the government for a decade but the attention from mainstream media has declined alarmingly.

Racing has traditionally been its own worst enemy, showing a reluctance to unite, speak out and take action. But the Q+A segment did show a determination from two trainers who effectively articulated just how difficult the business has become.

Trainers’ Association President Tony Pike was interviewed and said: We don’t mind paying the Chief Executive a huge pay-packet if they are delivering the results, but unfortunately we have had a succession of under-performing CEOs, and none of them has been around for a very long time either.”

Hall of Fame trainer Murray Baker was also allowed his penny’s worth: “Fantastic industry, poorly run. I feel sad – I have a lot of friends in it, this is their chosen career and they are battling to stay in it because it’s become too tough.”

When Owen interviewed Minister Peters she probably extracted more information from him than most when he said: “I’m addressing the issues and one of those issues will be resolved in this budget in terms of a sympathetic policy. We will look at all-weather racing because we are losing far too many events because of the weather.

“A lot of people think that racing is just for the wealthy – it is most definitely not – there is a stack of young people engaged in the business – a lot of Maori and Asians and the employment is critical. What should be a $2.5 billion industry has been stagnant at $1.6 billion

“How we fix prize-money is reconstruct this industry to get prize-money up right across the board. That’s why I having someone as highly experienced and knowledgeable as John Messara with a great track record, having saved racing in NSW. I have gone outside New Zealand so we can’t talk about bias – we have neutrality and I’m confident in the outcome.

“We are going to get the best possible answer to outsourcing and our fair share of the action for the owners and the punters. If you don’t have racing in a locality then the popularity base of racing will fade away.

“I don’t have the view racing can’t be revived – they trust me because of what I did last time and I didn’t have a chance to finish the job off, but this time I intend to put the structure in place so that the Minister of Racing in 30 years from now will have a very sound structure to live with.”