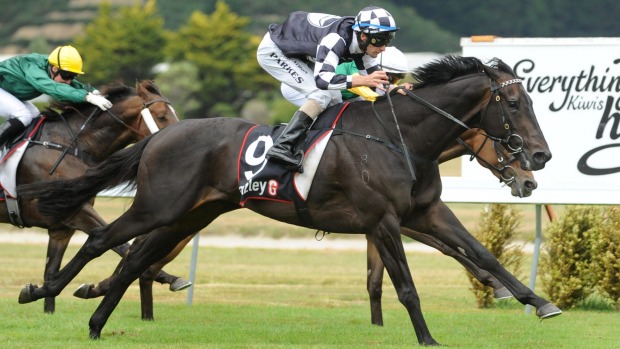 Kawi
As he hit the line first in Saturday’s Gr.1 Makfi Challenge Stakes outstanding winner Kawi rewarded the faith shown in him by his most ardent supporters, co-owners and breeders Steak and Christine Goodin.
While the Taranaki couple were applauding the triumph of their pride and joy it would be no surprise if there was a large extended “family” in their local community and beyond that were celebrating widely just for them.
That’s because not only have the couple been heavily involved in thoroughbred racing and breeding over the past 40 years they have also made their mark on the social fabric of the community through the fostering of troubled children over that same period.
The Goodin dairy farm and homestead has been the base for reforming the lives of well in excess of fifty boys over those years, a service that was recognised in Auckland during the week where Steak was awarded a Queens Service Medal for his work with the Life Education Trust and other troubled youth organisations.
“It certainly has been quite a week with the awards ceremony and now the wonderful win of Kawi,” remarked Christine Goodin.
“We got into racing a little by accident really as we inherited a broodmare named The Boss with a filly at foot after a death in the family. My father is Bob Sharrock’s brother and at the time he wasn’t that keen on us having a mare or racing a horse even though Bob was a trainer.
“As it turned out that foal became Mirikau Lass who went on to win nine races so we were hooked. It seemed quite an easy game at that stage, however, we did find out fairly quickly it’s not always like that.
“I guess it was only natural that racing would become a big part of our lives, firstly with Bob and then with Allan training for us.
“We began to race and breed a few while also offering agistment services to some of our friends who didn’t have the facilities like we had at the farm.”
Although their racing interests expanded the couple’s dairying business remained the backbone of their operation and played a significant role in the development of the Kawi story.
“The dairy farm has always been the major priority for us and it was through a good dairy payout back in 2002 that we ended up with Kawi’s dam,” explained Goodin.
“We didn’t have any foals on the ground that year so the boys headed off to the National Broodmare, Weanling and Mixed Bloodstock Sale at Karaka and came home with Magic Time.”
“Steak liked the Volksraad blood so he went to $18,000 for her. Unfortunately, she never made it to the racetrack although I guess she has more than made up for that with Kawi.”
The Goodins are now looking forward to welcoming the next progeny from Magic Time with a visit to Tavistock planned for the mare after she produces the Rock “N” Pop foal she is currently carrying.
“Since Kawi she has had a Sufficient colt, a Postponed filly and a Zed filly,” said Goodin.
“The Sufficient colt is in work with Allan Sharrock and he loves him so it would be nice to think he could show us something on the track in the coming months.”
Goodin was quick to pay tribute to the role Sharrock has played in their success as both breeders and owners.
“Allan and I are first cousins but he has been more like a brother over the years,” she noted.
“He is a very astute and talented horseman and he identified the potential in Kawi right from his early days. He was the one who recommended sending Magic Time to Savabeel so I’m just as thrilled for him as I am for Steak and I with what has happened with the horse.
“That win on Saturday was Allan’s 10th Group One as a trainer with four of those coming with Shez Sinsational who raced in the same ownership as Kawi so maybe we are a good luck charm for each other.” – NZ Racing Desk