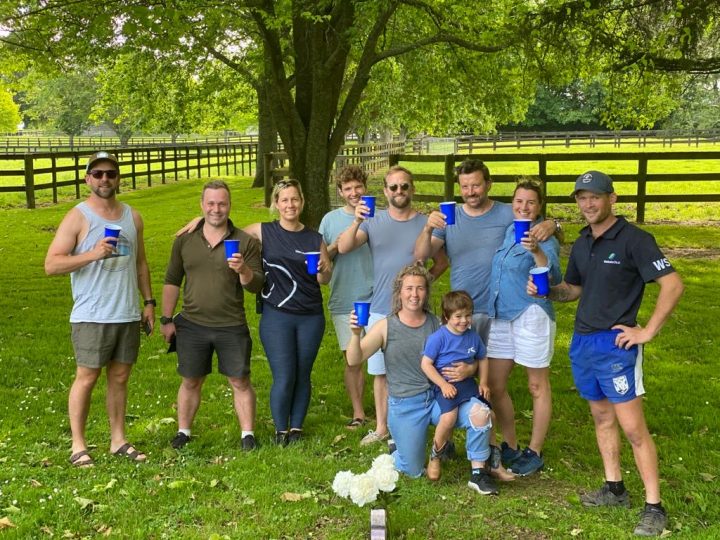 Waikato Stud celebrate the win of Aegon and pay tribute to his late sire Sacred Falls.

Aegon emulated his late sire Sacred Falls with a dashing performance to claim major honours in the G1 New Zealand 2000 Guineas at Riccarton this afternoon.

The Waikato Stud-bred and sold Aegon has come a long way in a short time and was an impressive debut winner at Taupo in August for trainers Murray Baker and Andrew Forsman before he was given a break.

He successfully resumed in the G3 Hawke’s Bay Guineas under jockey Leith Innes, who also guided Sacred Falls to triumph in the 2012 edition of the New Zealand 2000 Guineas.

Tragically, the stallion passed away last December due to a liver disorder and his loss was emphasised by the performance of his unbeaten son and first Group 1 winner Aegon.

“Eight years ago I won on Sacred Falls and they are very similar horses in nature and not very big, but put in 100 per cent every time,” Innes said.

Aegon settled well off a sedate pace on Saturday and unwound powerfully in the run home to maintain his perfect record.

“I had no negatives about the horse and I was confident of winning with him,” Innes said. “We got into a bit of a tricky spot, but I just had so much faith in him.”

“Full credit to the horse and to Murray Baker and Andrew Forsman, I’m just glad we got the job down.”

Aegon was bred and sold by Waikato Stud, as was third placegetter Marine, and was knocked down at New Zealand Bloodstock’s National Yearling Sale to Forsman for $150,000.

He is out of the Zabeel mare Toss Up, whose four foals to race have all been successful, and she is from the family of the G1 Ellerslie Sires’ Produce S. winner Good Faith.