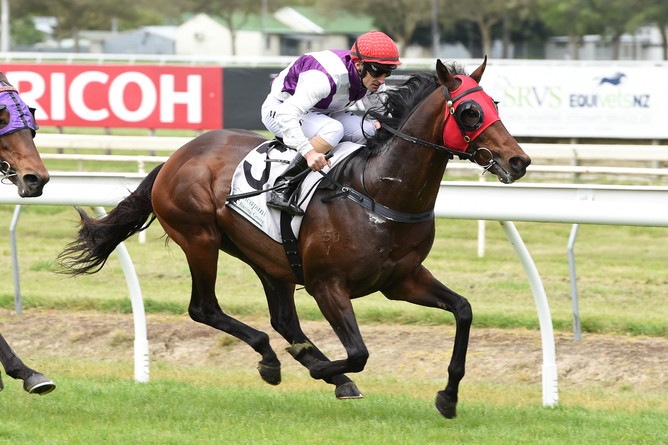 Ocean Emperor has freshened since his Singapore mission and is taking positive steps toward a return to racing in the Gr.1 Tarzino Trophy (1400m) at Hastings.

The son of Zabeel was taken to Singapore for the S$1.5 million Kranji Mile (1600m) on May 26 on the strength of his win in the Gr.2 Japan-NZ International Trophy (1600m) at Matamata last March and, though he finished only seventh, trainer and part-owner Gary Hennessy was satisfied with his performance.

“He travelled over great and I was happy going into the race, but it was disappointing how it panned out in the race,” Hennessy said.

“It was raining and the way the race was run you had to draw and alley and be on the pace.

“Though the race didn’t work out, the experience was good for him and he handled it well.”

“He still had good muscle tone and it hasn’t taken much to bring him up again,” Hennessy said. “He was to go to the Te Teko trials last week, but with them postponed until Monday he’ll go there now.

“He had a real good gallop on the grass this morning (Thursday) and after the Te Teko trials he’ll run in one of the open heats at Taupo before the first race there (on August 22). That should have him ready for the Tarzino Trophy.”

Ocean Emperor is nominated for all three legs of the Hawke’s Bay Triple Crown, but if he shapes very well in the Tarzino Trophy he is likely to miss both the Gr.1 Windsor Park Plate (1600m) and the Gr.1 Livamol Classic (2040m).

“If he happens to run in the first four in the Tarzino he’ll go to Aussie for the Underwood Stakes. He is nominated for the Cox Plate and that’s the same path we took with Ocean Park.”

Ocean Park, who now stands at Waikato Stud, won the Hastings 1400m feature, which was then known as the Makfi Challenge Stakes, then went on to win the Gr.1 Underwood Stakes (1800m), Gr.1 Caulfield Stakes (2000m) and topped it all off with victory in the Gr.1 Cox Plate (2040m).

Ocean Park achieved his glory as a four-year-old and now six years later Hennessy is chasing the same dream with a seven-year-old dual Group Two winner.

“It’s not as if we’re going into unchartered territory. We know what is required,” Hennessy said.

“It’s the same pathway we took with Ocean Park and they’re very much the same mould and style of horse. It all hinges on how he goes in the Tarzino.”

Shaun McKay was aboard Ocean Emperor in his latest Group Two win and he will ride him in the Tarzino Trophy with an Australian jockey engaged if the Melbourne trip eventuates.

Bred and sold by Waikato Stud, Ocean Emperor is out of the Group Three-winning Pins mare Tootsie and was a $450,000 Karaka purchase by Gary Hennessy from the 2013 Karaka Premier Yearling Sale.– NZ Racing Desk