Mackintosh back in perfect style 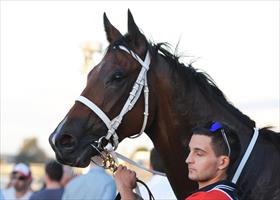 WS graduate Mackintosh has made the sweetest of returns at Rosehill this afternoon with a dashing victory in the Gr 2 Theo Marks Stakes. The four-year-old resumed from a three month break to down a competitive line-up of sprinters.
A son of Pins, Mackintosh showed a sharp turn of foot in the straight to win for the sixth time in his nine start career. “Obviously he is a horse with talent and the plan is to go second up to a mile in the Epsom,” trainer Chris Waller said.
Mackintosh won two of his first three starts for Byerley Park trainer James Bridge before his sale and transfer to Waller’s team. He subsequently claimed the Gr 3 Rough Habit Plate and the Gr 3 Grad Prix Stakes during last season’s Brisbane carnival before failing in the Gr 1 Queensland Derby.
The gelding impressed his rider Joao Moreira, who believed he will only improve over more ground than today’s 1300 metres. “He’s still very green and he was hanging in, he did a lot of things wrong but he’s got a lot of ability,” he said. “The longer distances will be better for him.”
Mackintosh is out of the Generous mare Lolly Scramble, who is a half-sister to the Group Two winner Viennetta. She is in turn the am of the multiple Group-winning Australian sprinter Golden Archer and the family of the Group One winners Anacheeva, Headturner and O’Marilyn.
Back to all news
SHARE
Recent News