Mary Quant all class at Rotorua 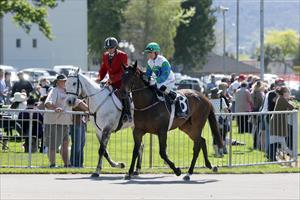 Royally bred mare Mary Quant has provided trainers Lance O’Sullivan and Andrew Scott with a happy dilemma as they set about planning her upcoming summer campaign.
The daughter of super sire O’Reilly and multiple Group One winner Legs made her reappearance at the races a winning one at Rotorua on Saturday after having been off the scene since finishing well back in the Gr. 1 New Zealand Oaks (2400m) back in March.
The victory over 1200 metres in the NZB Insurance sponsored Pearl Series event was just what the doctor ordered although it did provide a few questions for her mentors as to where they should head with the mare over the next few months.
“She has come back much stronger after her winter break so we were hopeful of a forward showing on Saturday,” noted Scott after the performance.
“Lance rode her in a gallop on Tuesday and said she felt very well in herself so we expected to see her running on strongly.
“It was really a question of whether the 1200 metres might be a little short for her but a lovely ride by Lisa (Allpress) had her a perfect spot all the way and she was too good in the run home.
“On her last preparation you would suggest that she will be well suited over a middle distance later in this campaign however the turn of foot she showed could mean we are better focusing around a mile with her.
“I guess it’s a nice problem to have but we won’t be making any decisions like that until we see how she comes through this run.”
Back to all news
SHARE
Recent News