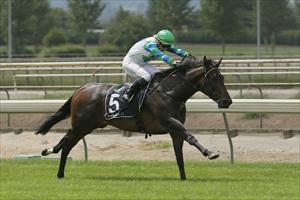 Co-trainer Andrew Scott believes this is the season where progressive mare Mary Quant will deliver at the top level.
The five-year-old daughter of multiple Group One winner Legs delighted her connections with an effortless performance at last week’s Te Teko trials which saw her glide to victory over 1010 metres in the first open heat of the day.
Settled at the rear of the eight horse field, rider Craig Grylls barely moved a muscle as the mare loped around the field on the point of the turn before cruising past her rivals in the last 50 metres to score untouched.
“That was really pleasing and she did it pretty effortlessly,” noted Scott who prepares the mare in partnership with Lance O’Sullivan at their Matamata base.
“She has come back from a nice long spell in great shape. She has matured nicely and we think that she is in line for her best season yet.”
The winner of five races from 17 starts tackled stakes company at the last two runs of her four-year-old campaign with no reward, however Scott believes she is ready to make amends for those failures.
“We think she is up to the best company so our goal has always been to get her some black type and that hasn’t changed for this campaign,” he said.
“She will kick off over 1200 metres in a rating 85 event on the 10th of December and then we will plan from there.
“We think she is best suited at around the mile so opportunities around that distance are what we will be looking for.”
Scott also reported that Friday’s impressive Otaki debut winner Princess Rihanna would now be set for the Gr. 3 Barneswood Farm Eclipse Stakes (1200m) at Ellerslie on New Year’s Day while stablemate Sound Proposition is still on target to contest the Gr. 1 Zabeel Stakes at the same venue on Boxing Day. – NZ Racing Desk
Back to all news
SHARE
Recent News