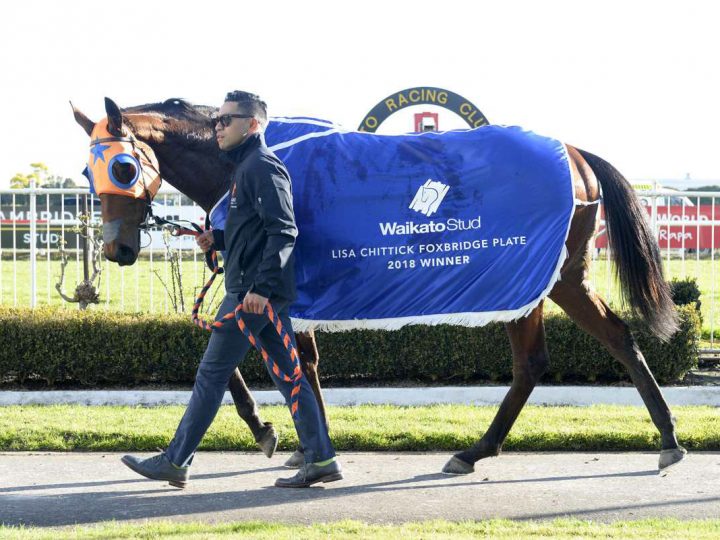 Winning a trial narrowly but well on 17 July at Te Rapa, when having her first sight of the course, Melody Belle was given a beautiful inch-perfect ride by Shafiq and was able to nail race favourite Julius on the line, winning by a nose.

Proficient with give in the ground, Melody Belle coped with the Slow9 footing better than most, running the 1200 metres in 1:13.9 and last 600m in 36.9. In addition, she returned surprisingly generous odds on the NZ TAB tote: $9.40 & $3.00 – but the price was also a reflection in the depth of talent amongst her rivals.

The Group One winner recorded her sixth win from 13 starts, taking her earnings to $986,406 for the Fortuna Melody Belle Syndicate (Mgr: John Galvin).

The win also marked a fantastic start to the solo training career of Jamie Richards, following three seasons in partnership with Stephen Autridge. Interestingly, Richards started his training career with a stakes win when Stella Di Paco was successful in the Castletown Stakes (Listed, 1200m) at Wanganui, May 2015, ahead of winning the 2015/16 training premiership with 104 wins.

Te Akau Racing set a record number of 17 stakes wins last season, and to commence proceedings with a Group Two victory is just what the doctor ordered.

Te Akau principal David Ellis purchased the stellar filly for $57,500 at the 2016 New Zealand Bloodstock Premier Yearling Sale, from the draft of Haunui Farm, and was on hand to soak up a special moment.

“It was one of the biggest thrills I’ve ever had on a racecourse, to see Jamie’s first win, on a course that is very dear to my heart, in a race sponsored by very good friends of mine and a family that has been very generous to Te Akau, was quite amazing,” Ellis said.

“Lisa Chittick was a very good friend of my family and the whole thing could not have been more emotional or more of a thrill.

“I’m thrilled for the staff that supported Jamie and all the owners that have given him so much support, and it’s great to see a young man win his first race in Group Two against the best horses that were available in New Zealand.

“It was also special because it was Jamie’s birthday and I watched the race with his Mum and Dad (Leanne & Paul Richards), along with some very loyal Te Akau owners. He had Melody Belle trained to the minute and it was a just a special day.

“She’s a filly that I bought and John Galvin would be Te Akau’s biggest owner. He’s always been a huge supporter of Te Akau, both here and in Singapore, and in particular he’s had a lot of confidence in Jamie.

“Having Suppy (Shafiq) ride such a wonderful race also added to an extraordinary achievement because he’s been working for Te Akau since he was a kid, was twice Champion apprentice in Singapore, when up there with Mark (Walker), and we’re thrilled to have him back where it all began for him.”

Melody Belle provided Shafiq with his second stakes win since returning to New Zealand, after winning the Travis Stakes (Gr. 2, 2000m) aboard Our Abbadean (Lookin At Lucky) in April at Te Rapa.

John Galvin said of the win: “I was unsure on the line, but I did say to someone, that angle (outside) is going to favour us. When I looked at the replay it looked like a dead-heat, but we got there, so pretty exciting.

“We thought she might have been half a run short, so we were not quite one-hundred percent positive today, but a nice draw, we thought she’d handle the track and she’s a quality filly.”

Asked how much confidence the win would provide ahead of the weight-for-age $200,000 Tarzino Trophy (Gr. 1, 1400m) on 1 September at Hastings, Galvin said: “I guess it gives us a lot of confidence. You’d be crazy not to be confident after that [win].”

Melody Belle was shortened immediately by TAB bookmakers from $9.00 to $4.00 favourite for the Tarzino.

Thrilled with the win, trainer Jamie Richards admitted to some reservations beforehand.

“I was a little bit worried with her during the week,” he said. “Her work wasn’t that flash on Tuesday, and I didn’t want to pump her up too much, but she is racehorse and was given a lovely ride by Suppy and really toughed it out to the line.

“She will go to the Tarzino, all going well. That will take a bit out of her, she’s had a hard run first up today, but we will get her home and assess things. She didn’t have a great three-year-old season, but looks like she’s in for a good year and I’d like to say thank you to John Galvin and his team, and also Dave (Ellis) and Mark Walker for giving me this job. It’s a big thrill.”