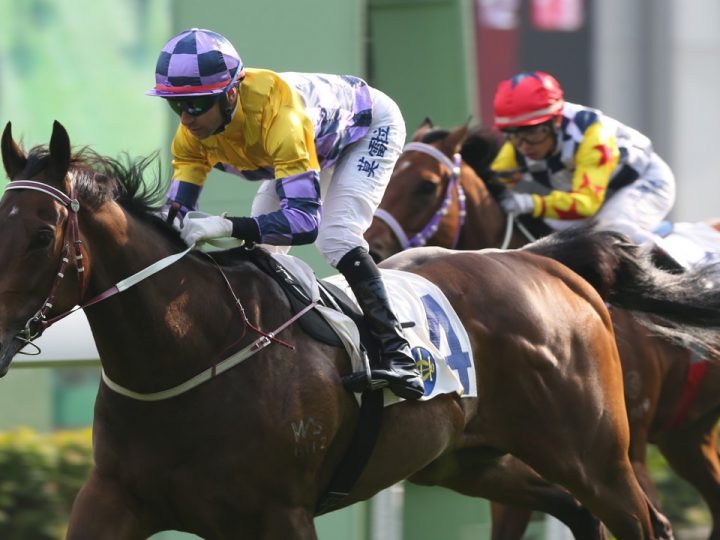 Moore unveiled the first of his contenders for the 2018 BMW Hong Kong Derby when three-year-old Easy Go Easy Win (Savabeel) saluted at his local debut in the Class 3 Lukfook Jewellery PT Bridal Collection Handicap (1200m). It was the middle leg of a treble for Joao Moreira, who scored his first win for Moore since Eagle Way’s G3 Queen Mother Memorial Cup Handicap (2400m) triumph in late April.
“We had an opinion of this horse in Australia, he ran well in three starts and we were planning on taking him up to the J J Atkins, a Group 1 for two-year-olds over 1600m, in June,” Moore said. “But I told John Sargent, who trained him down there, not to send him there, that he would be well-rated for Hong Kong and that he could put a few wins together at that mark.
“There’s still a lot of improvement there, he’s looking for further. I’m a big fan of the Savabeel and Pins nick, and I have a big opinion of this horse going forward. This is our first horse for Marces Lee, his son (Barry) owns this one but Marces has put a lot of faith in us and I’m grateful to win this for him. Today is the start of the new brigade coming onboard.”
A $380,000 purchase from Waikato Stud’s 2016 Inglis Easter draft, Go Easy Win is from resident Pins mare Tootsie and is a half-brother to recent Group 2 winner Ocean Emperor.