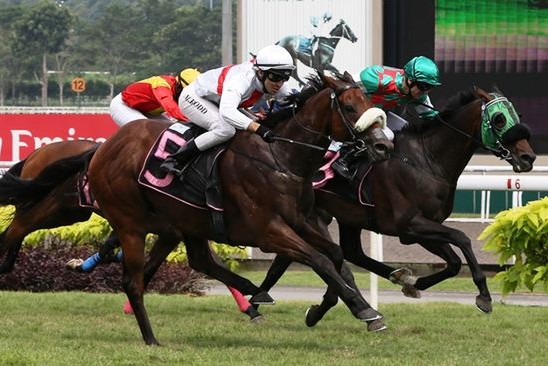 Talented galloper Murrayfield ended a long winless run with a nice come-from-behind win in the S$60,000 Flax 2012 Stakes, a Class 4 race over 1600m on Sunday.
The Pins five-year-old has not scored since July 2016 when he accounted for Benchmark 67 rivals with relative ease.
Trainer Stephen Gray rightly pitted him against better horses thereafter. He lost no admirers at first, but his form started to taper off thereafter.
Dropped back in Class 4 company of late, Murrayfield ($28) had been showing a return to his old form, finally striking it lucky again, aided in great part by a gem of a ride from first-time partner Michael Rodd.
The Australian jockey said he went in with a simple battle plan. Follow Fuego wherever he went – and the ultimate reward was a half-a-length advantage at the wire.
“The race panned out exactly as I wanted. There was a decent tempo and my horse was feeling really good where he was,” said Rodd.
“I didn’t have to stretch him out, I was just happy to be on Vlad’s back. It’s always good to follow good jockeys because they know what they are doing, even if it’s also hard to get past Vlad.
“There was only one horse I was following into the straight and it was Vlad’s horse. He was the one to beat.
“It may not have been visually exciting, but in the last 200m, he was not going to get beat.”
Favourite Captain Jamie (Nooresh Juglall) was in close attendance but coursing out wide from the awkward alley. He did look like he was tracking up well into the straight, but soon petered out to run a disappointing ninth.
The run of the race was Lim’s Ripple (Glen Boss) who came from the clouds to run third another length away. The winning time was 1min 34.95secs for the 1600m on the Long Course.
“It was a beautiful ride from Michael. He got back to the fence and he came wide in the end as he is a horse who needs room,” said Gray.
“He has been a bit disappointing, but I think that was because he had got high in the ratings and was going against better horses.
“The Long Course probably helped him today. He’s a bit like Golden Curl (who scored three races later) and I will put him out now.
“Hopefully the good break will help him furnish out into a nice horse.”
With that fourth win from 22 starts, Murrayfield has now taken his total prizemoney past the S$210,000 level for the St George Stable of owner Paul Hickman
Back to all news
SHARE
Recent News