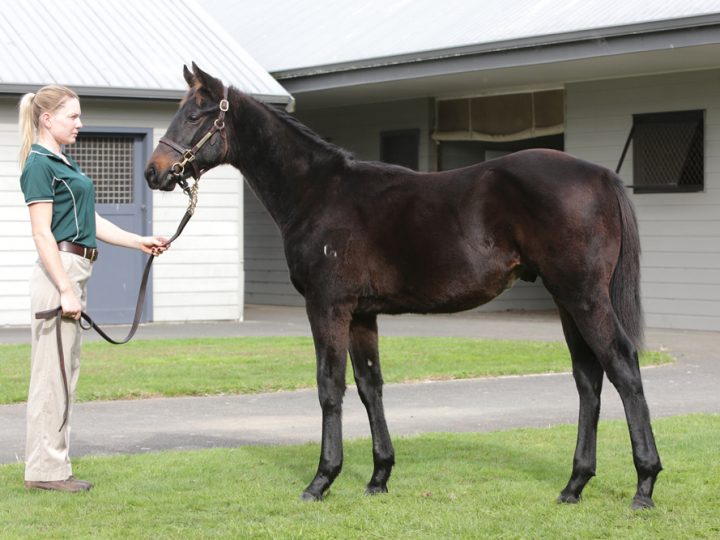 Ocean Park - Happy Forever Colt
The buying bench at Karaka this afternoon were again hot on the trail of Ocean Park’s weanlings. WS’s Gr 1 Cox Plate winner’s first crop representatives remained high on their shopping lists and sold up to $80,000.
The top lot was offered by Gordon Cunningham’s Curraghmore with the colt out of a winning French mare, who is a daughter of Happyanunoit. She was the champion juvenile of her year in New Zealand before she won twice at Group One level in the United States.
The $80,000 price paid by Victoria interests surpassed the top price of $72,500 on the first day of the session for the Ocean Park-On The Board colt sold by Haunui Farm.
WS celebrated two good sales of their own with the Ocean Park filly out of Charlotte’srevenge going to Matamata identity Paul Ryan for $38,000. The youngster is a half-sister to the multiple winners O’Reilly’s Revenge and the family of the Group One performers Pin Up Boy (Pins) and Double Dare (O’Reilly).
The filly’s sale was followed by a colt out of Gio who went to Berkley Stud for $26,000. He is from a particularly successful female family and is a half-brother to the Gr 3 Lion Red Plate winner Crepe de Chine (Pins), her stakes-winning sister Glam Slam and the champion Singapore sprinter Arenti (O’Reilly).
Meanwhile, WS’s son of Pins drew plenty of interest before he was knocked down to Prima Park for $45,000. He is out of an unraced half-sister to the multiple Group Two winner Century Kid (Centaine).
Ocean Park’s associate sire Rock ‘N’ Pop was also in demand with Curraghmore’s colt out of the Gr 2 City of Auckland Cup winner Highflying selling for $35,000. He is a half-brother to the ill-fated Listed NZ St Leger runner-up Media World (O’Reilly).