Nowyousee it, you will probably for a while 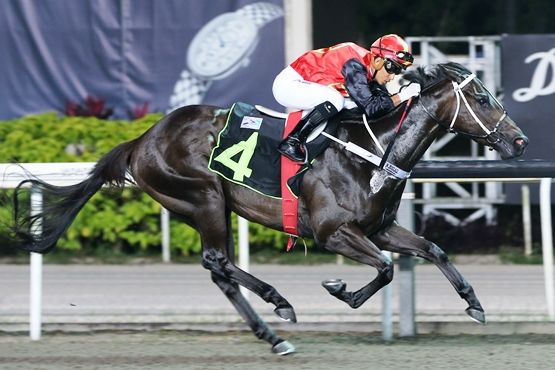 The Titanium Racing Stable had every reason to whoop it up on Friday night after newcomer Nowyousee (O’Reilly) raced away a facile winner in the $75,000 Restricted Maiden race over 1000m.
Jeffrey Soh’s outfit has invested massively in racehorses in the last two years, including stock from Argentina, but with returns that fell way short of their lofty expectations, other than the odd decent sorts like Halo Bright or Super Brilliant.
After they parted with their first trainer Theo Kieser this year, success still took a while to materialise, other than Redoubt finally breaking his duck at his ninth outing for new trainer Ricardo Le Grange.
But Nowyousee seems to have given Soh and his partners reason to believe their luck has finally turned. At least, Le Grange was convinced the O’Reilly three-year-old could give the happy bunch some more fun down the road.
“This horse showed ability from the first day he came to us,” said Le Grange of the former Kieser ward.
“There is no more deserving owner in this game than Jeff. He puts in a lot in racing and deserves all the success that comes his way.
“This is a nice horse. It was a positive ride from Nooresh (Juglall). He got him going from the gate and it’s paid off.
“May there be more to come from this horse and for Jeff.”
Beginning from an outside gate in the small eight-horse field, Nowyousee was able to cross to the rails to dictate before leaving his rivals rooted to the spot upon straightening. Nowyousee extended nicely under Juglall’s urgings to post a comprehensive 3 ¼-length win from his $12 joint-favourite Raheeb with Wild Bee third another half-a-length away.
The winning time was 58.39 seconds for the 1000m on the Polytrack.
“He was a bit green, but we’ve been planning for a long time for him to win first time out,” said Juglall.
“He showed plenty of speed from the gate, and once I balanced him up at the top of the straight and I popped the question, he let down well to win a nice race.
“A big thank you to Jeff and also (Le Grange’s former mentor) Pat Shaw for being around tonight. Jeff has an excellent horse with a bright future here.”
Back to all news
SHARE
Recent News