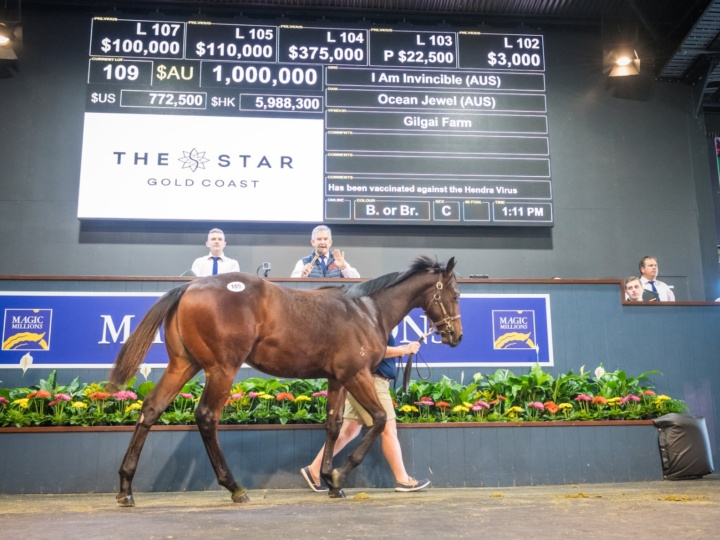 When the hammer fell at AU$1 million on an I Am Invincible colt on the opening day of the Magic Millions National Weanling Sale on the Gold Coast it also marked a significant moment in the ever- evolving career of Ocean Park.

The session-topping youngster, only the second weanling to reach seven figures in Australia, was signed for by trainer Ciaron Maher and is a grandson of Waikato Stud’s multiple Group 1-producing stallion.

The weanling was offered by Gilgai Farm and is the first foal of Ocean Park’s daughter Ocean Jewel, successful on four occasions including the Listed Placid Ark S.

Her colt is a blood brother to multiple Group-winning juvenile Catch Me and a great-great grandson of Blue Hen mare Eight Carat.

Ocean Jewel was purchased privately through Damon Gabbedy’s Belmont Bloodstock for a reported AU$1 million and Gilgai Manager Kelly Skillecorn said it was an outstanding result to get such a strong return off her first foal.

“I am surprised at that result. They said he was the best colt at this Sale, but it’s still amazing. It helps a lot,” he told TDN AusNZ. “I must thank Damon Gabbedy for this horse because he could have sold her to anyone, but he sold her to us.”

Maher had spotted him at Gilgai Farm a number of weeks ago and took an immediate shine to him.

“We’d hoped we wouldn’t have to go quite that dear, but the yearling prices are going up and up this year, and we thought it was a good opportunity. That’s a yearling price, but he’s a colt that is clearly a standout, out of a good mare and by the right stallion in I Am Invincible.

“Physically, he has got the movement and strength to think he should go early. Someone said to me, it’s the best weanling they have seen at this sale ever and they have been coming here for a number of years. Obviously, you have to pay for a horse like that.”

Maher said the colt would go back to Gilgai before going through the stable’s yearling system in early 2022.

The sale was another feather in the cap of Ocean Park, sire of Group 1 winners Kolding, Tofane and Ocean Billy while the Waikato Stud-raced Fabric, Star of The Seas and Oceanex have all triumphed at Group 2 level.