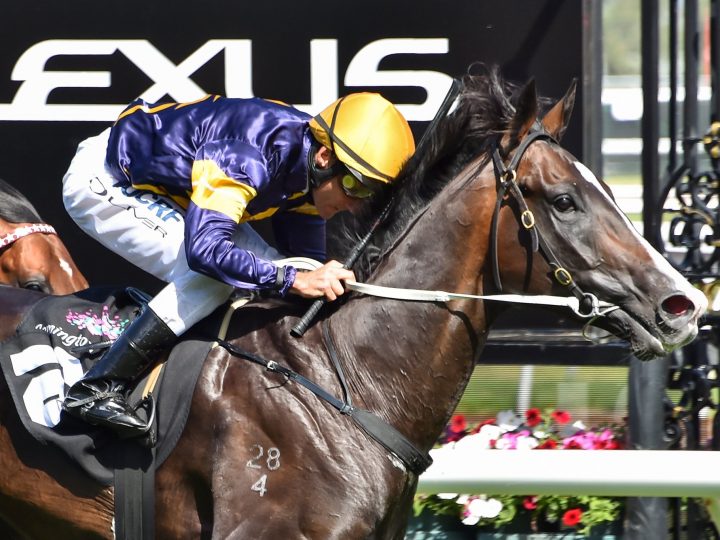 Group One honours now beckon a three-year-old son of the late, great Waikato Stud stallion O’Reilly. Living up to his name, Grunt produced a powerful performance at Flemington this afternoon to claim the Group Three CS Hayes Stakes.

The lightly-raced colt is now unbeaten in his last three appearances following a debut third last season. “He’s a long-striding horse and the 1400 metres today wasn’t ideal, it was a bit short, but it was a run to get him into the Australian Guineas,” Caulfield trainer Mick Price said.

“He’s a beautiful O’Reilly colt and the Guineas is a valuable race for a colt – Zabeel won it – and this bloke just loves Flemington. It’s a great result.”

A $220,000 Karaka purchase in 2016, Grunt was given a gun ride behind the pace by Damien Oliver and finished determinedly in the closing 100 metres. “He’s a lovely colt and he dug deep,” he said. “When I got serious on him he rose to the challenge and got the job done well.”

The Waikato Stud graduate Embellish also performed creditably in finishing sixth in his Australian debut. The Stephen Autridge and Jamie Richards-trained brother to the Group One winner Diademe raced near the speed on the fence and the son of Savabeel kicked on strongly for rider Opie Bosson.

The Group One New Zealand 2000 Guineas winner was a $775,000 purchase out of the farm’s 2016 Premier Sale draft for Te Akau principal David Ellis. His dam Bling is an O’Reilly mare from the family of the multiple Group One-winning sprinter Sacred Star.