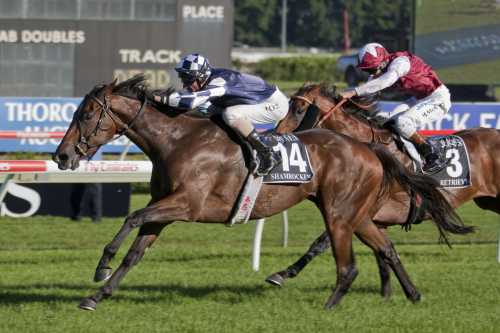 Shamrocker
O’Reilly’s outstanding daughter Shamrocker earned herself a piece of Australasian racing history at Royal Randwick on Saturday. She completed a unique double when she once again proved superior to her male counterparts with a stunning performance to race away with the Gr 1 AJC Australian Derby.
“She’s the first filly to ever win the Australian Guineas and the Australian Derby,” her Flemington trainer Danny O’Brien said. “We’ve always been waiting for a mile and a half and today you’ve seen the best of her at 2400 metres.”
Successful rider Glen Boss, who has now ridden the filly in all four of her career wins, said he never had a moment’s concern during the race. “She got into a good spot early and then she obeyed every command and relaxed. She was very, very strong at the trip.”
Shamrocker, who also won the Gr 2 Sires’ Produce Stakes as a two-year-old, will back up next in the AJC Oaks and then connections thoughts will turn toward the Melbourne Spring Carnival. “She just loves Flemington and I’ve got no reason to think she can’t run two miles,” O’Brien said in reference to the Melbourne Cup. “She’s just a very, very good filly.”
A $65,000 yearling buy at Karaka, Shamrocker is out of the Blues Traveller mare Bohemian Blues who is a half-sister to the Singapore Gr 3 winner Fairy Tale and the multiple Macau stakes winner Juryman-Rock N Roll Kid (HK). It is also the family of the New Zealand stakes winner Besty Coup.
Back to all news
SHARE
Recent News

Getting older used to be recognised as getting wiser. There is really no other plus apart from the fact we mostly are unsure about the alternative. I am not an atheist but not a believer. …

Tutukaka put his Group 1 credentials on the line this afternoon and he sailed through with flying colours to triumph in the Listed Geelong Classic. The Tony Pike-trained 3-year-old son of Tavistock, who is part-owned …